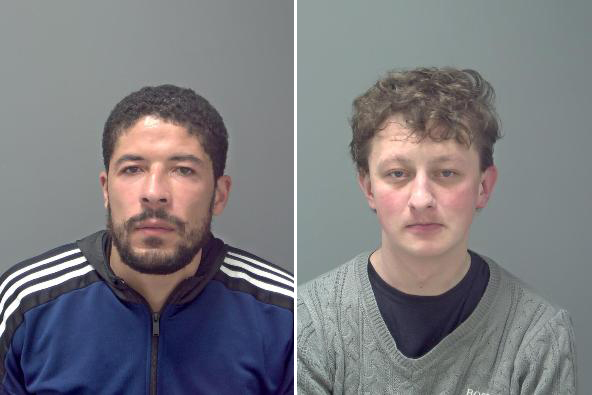 Two men from Ipswich have been jailed for drug offences in the town.

Wayne Scullion and Arnoldas Miglinas, appeared at Ipswich Crown Court for sentencing today, Friday 15 October, charged with being concerned in the supply of class A drugs in the town, namely crack cocaine and heroin, between 1 April 2020 and 20 May 2021.

Scullion, aged 29 and of Newson Street, was sentenced to 7.5 years in prison.

Miglinas, aged 21 and of Station Street, was jailed for 4.5 years.

Both men had pleaded guilty to the offences at previous hearings.

Miglinas also admitted an unrelated charge of aggravated burglary in Webb Street on 8 March 2021 and was given 7 years, which will be served consecutively making a total sentence of 11.5 years.

The sentences follow a police operation, known as Operation Broome, to tackle Class A drug dealing activities being committed in the Maple Park area.

During the investigation officers patrolled areas known for class A drug activity and conducted stop and searches of individuals seen loitering or acting suspiciously. Those found with drugs or drug paraphernalia were arrested and mobile phones were seized.

Detectives carried out extensive enquiries, including DNA testing and complex analysis of mobile call data, which enabled officers to recover text messages indicating numbers connected to class A drug dealing in the town.

As detectives progressed their enquiries, they identified Scullion and Miglinas as two key players operating a drug dealing business under the name of GG.

Further investigative work led detectives to believe Scullion was the leader of the illegal drugs operation and he was arrested on 20 May 2021, and subsequently charged.

Miglinas was arrested three times during the investigation, and on 26 May 2021 he was charged for his involvement in class A drug dealing.

Detective Constable Daniel Steel said: “Operation Broome was a complex and thorough investigation, which started in April 2020. It involved the meticulous analysis of mobile phone data, combined with proactive stop and searches of the key individuals where Class A drugs and phones were seized.

“The custodial sentences handed to Scullion and Miglinas are reflective of the seriousness of the criminality they engaged in, over a prolonged period of time. Their drug dealing and associated anti-social behaviour blighted the local community in the Maple Park area of Ipswich.

“Their convictions should serve as a stark warning to those who would commit these impactive crimes. Suffolk Constabulary is committed to tackling and dismantling groups seeking to profit from the sale of Class A drugs and the exploitation of vulnerable persons.”

The SCDT core aim is to disrupt serious and organised gangs whose criminal activity focuses on issues such as drug supply and harmful personal acquisitive crime such as robbery/burglary. The team develop the relevant information and intelligence, conduct enforcement activity and then provide an officer who will build the case and see the investigation through to trial.

Information can help the police remove drugs and violence from communities. If you know of suspicious activity taking place in your locality please let us know using the 101 number and police will respond, or call Crimestoppers anonymously – either online at www.crimestoppers-uk.org or by calling 0800 555 111.