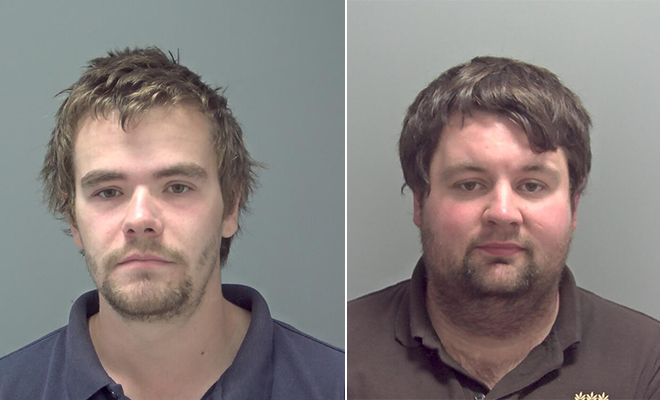 Two men have been jailed for burglary following a string of offences in Suffolk and across the country.

The non-dwelling burglaries took place between 4 May 2020 and 19 June 2020 and took place at a business called Mowerfix Ltd in Worcestershire, the cricket ground at Ingham in North-Norfolk, Walsham-Le-Willows Sports Club and Bungay and District Sports club in North-Suffolk.

Phillips also pleaded to a further burglary on the 19 August last year in Snape, Suffolk. The total amount stolen in the offences amounted to nearly £40,000 worth of equipment.

During the investigation, the pair engaged with the Op Converter team to secure a further offences that were Taken Into Consideration, which included offending that occurred across the country as far as Devon and Nottingham across a much longer time period going as far back as December 2019.  Phillips had 58 other offences TIC’d, while Moyle had 38 TIC’d.

The pair admitted to targeting churches, community centres, sport grounds and infrequently schools. The break-ins primarily secured gardening tools, lawn mowers and ground maintenance tools, but also took food, fuel and power tools, including site equipment and larger objects including mini diggers and dumper trucks. The approximate value of the amount stolen in these other crimes is thought to be in the region of £122,000.

Their activity caused a great deal of disruption to businesses and services that impacted further on the local communities as well as a great financial drain to some agencies who could ill afford to cover the cost of the loss during the hard times of the Covid 19 lockdown last year.

Investigating officer Ed Vincent of Lowestoft CID said: "I am extremely pleased with the sentence, bearing in mind their guilty pleas and it reflects the seriousness and the prolific nature of the offending and the period of time in which it occurred.

"It was a great piece of team work as well, in particular thanks to our police colleagues as West Mercia and had it not been for their efforts in laying the operational groundwork before their arrest it is strongly believed the pair would have continued in their activities to commit further crimes.

"I should also like to pay tribute to the Op Converter team who travelled considerable distances and worked long days to capture as many offences in the TIC schedule as possible. Thanks also need to be expressed to Hammonds of Halesworth who assisted in the recovery and storage of a large quantity of property recovered from the pair and accelerated the returning of a large number items to various victims which we are continuing to identify and return.”

DC Barry Simpson from the Op Converter team said: "It is very gratifying that the Op Converter process will have seen some closure for many of their victims they preyed on by the fact they admitted other crimes and enable the return of much of the stolen property.”

*The 38 TIC’d by Moyes were joint with Phillips – the other 20 by Phillips were committed on his own.