After a two-year break, police officers, staff and volunteers at Suffolk Constabulary were recognised at the force’s Long Service Awards ceremony, celebrating individuals’ exceptional long service and outstanding work. The life-saving efforts of constabulary employees, as well as members of the public, were also recognised across the two evenings as Royal Humane Society awards were presented. 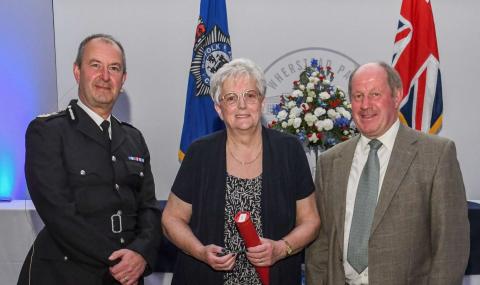 Chief Constable Steve Jupp hosted the evening, joined by dignitaries including Suffolk High Sheriff Jamie Lowther-Pinkerton and Vice Lord Lieutenant of Suffolk Robert Rous. They were joined by Police and Crime Commissioner Tim Passmore, as well as other senior officers and staff, at the event held at Wherstead Park on Tuesday 3 and Wednesday 4 May.

One of the many awards handed out saw Detective Chief Superintendent Andy Smith given a Special Recognition Award from Jersey Police for his outstanding investigative leadership in managing a protracted, complex and voluminous investigation.

The two evenings also saw a total of seven Judge’s Commendations given to officers.

These included Detective Inspector Matthew Adams and Detective Sergeant John Beales who were recognised for their professionalism and support into a complicated and long-standing investigation involving many covert observations that led to all bar one defendant pleading guilty. The defendant was convicted by the jury, and the judge in the case commented he had rarely seen a complex case better put together for the jury to follow.

Police Constable Andrew Bashford was recognised for the part that he played in responding to a domestic shooting in Barham in May 2020. Pc Bashford entered the premises with very little detail about what he would face and arrested the suspect who had used a shotgun to kill his wife.  The house had to be made safe and young children protected.  It was an extremely traumatic situation and His Honour Judge Levett commented how well the police had dealt with this incident in the seconds and minutes that followed the arrest, dealt with two young children, made the entrance of the house safe and the judge noted his admiration for the extremely professional manner in which Pc Bashford had acted.

Sarah Hayter and Detective Sergeant Rory prior were praised for their commitment and attention to detail in investigating a rape case that ultimately assisted in the sentencing of the defendant.

Temporary Detective Sergeant Laura Cotton was recognised after investigating the rape of two young girls. During the investigation, Laura built trust and rapport with the young victims, with the two offenders each given 22-year sentences.

The final award on 3 May was given to police volunteer Christine Shelley, fondly known as Tina, for giving 10 years of voluntary service.

Tina has given 52 years of combined service in various roles to the constabulary. This includes her role as a Police Support Volunteer within the force’s museum for the last 10.

Assistant Deputy Chief Constable Rob Jones said: “Tina’s hard work ethic, along with her practicality and attention to detail, has meant she has greatly assisted in the improvement, development and expansion of the museum.

“Tina is an amazing Police Support Volunteer and has previously won awards in recognition of the high number of voluntary hours she has contributed.”

Speaking to the winners at the start of the first of two evenings, CC Jupp said: “Tonight is a chance to come together with family, friends, and your policing family to be recognised for the very important role you have played in policing our communities.

“We will hear of remarkable examples of service and dedication but collectively there is the reminder of what an outstanding service we have the privilege of working in.

“For the last few years Suffolk has been recognised as one of the safest counties in which to live, work, travel and invest. This achievement would not be possible without the dedication and commitment of all our staff and of course, the tremendous support of their partners, families, and friends. It is by presenting these medals and awards that we recognise the contribution made by them all.

“I would like to give my personal thanks to all the medal and award recipients, for the valuable contribution that each and every one of you have made to the policing of this county.”

After the two events, PCC Tim Passmore said: "I am delighted we were able to stage the constabulary’s award ceremonies this year and catch-up on the two years we missed.

“It is really inspiring to hear the commitment and dedication of officers, staff and volunteers. The ceremony also recognised some members of the public who helped save lives which is particularly good to see.

"Every year we see fantastic examples of service and dedication in the county and it makes us appreciate the many remarkable people working within the constabulary.

“It is so important we celebrate the good work of those who have gone the extra mile to provide exceptional service and on behalf of Suffolk residents I congratulate all the award winners on their success.”

The following officers, staff and members of the public were eligible to receive awards but were unable to attend the ceremonies on 3 and 4 May. 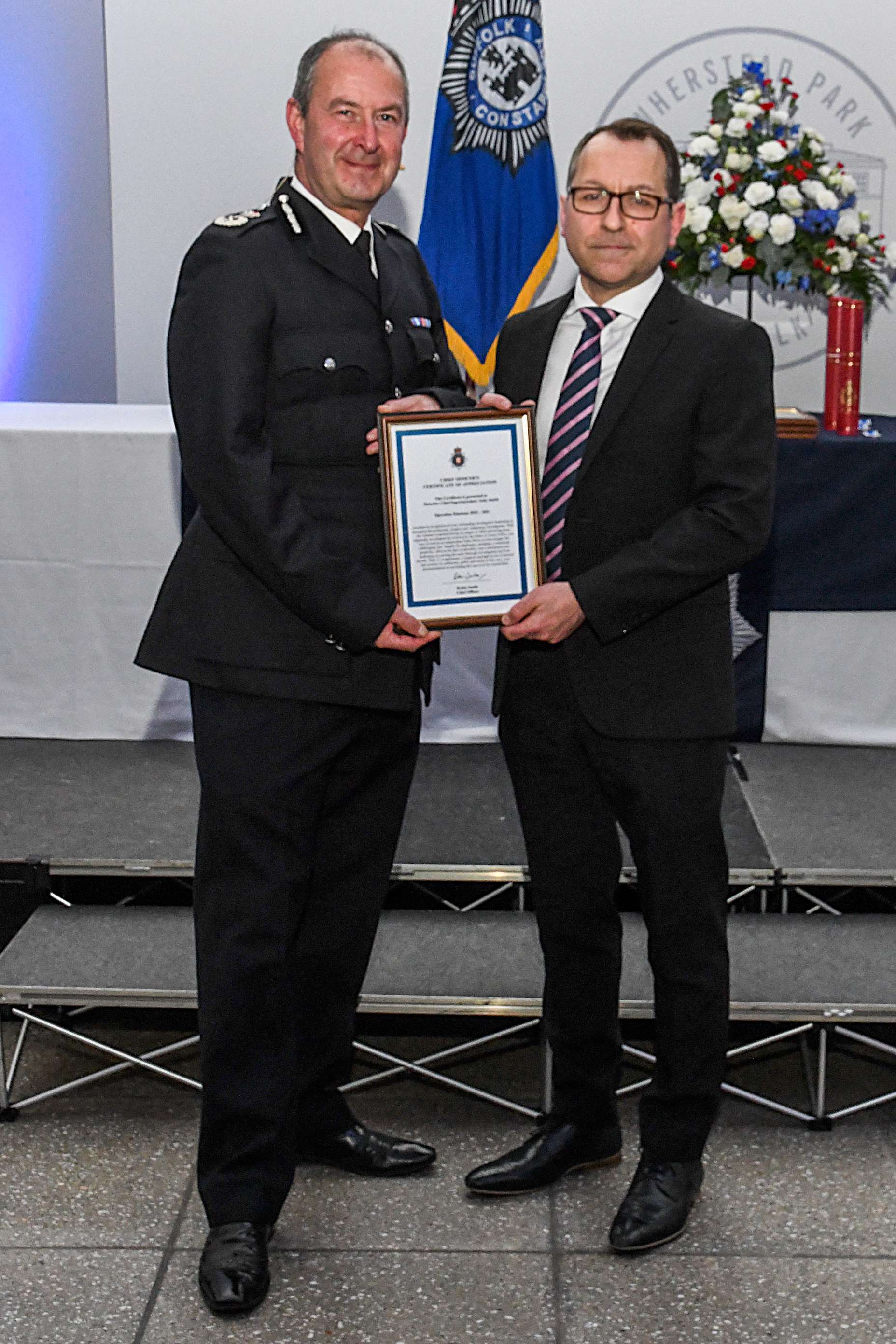 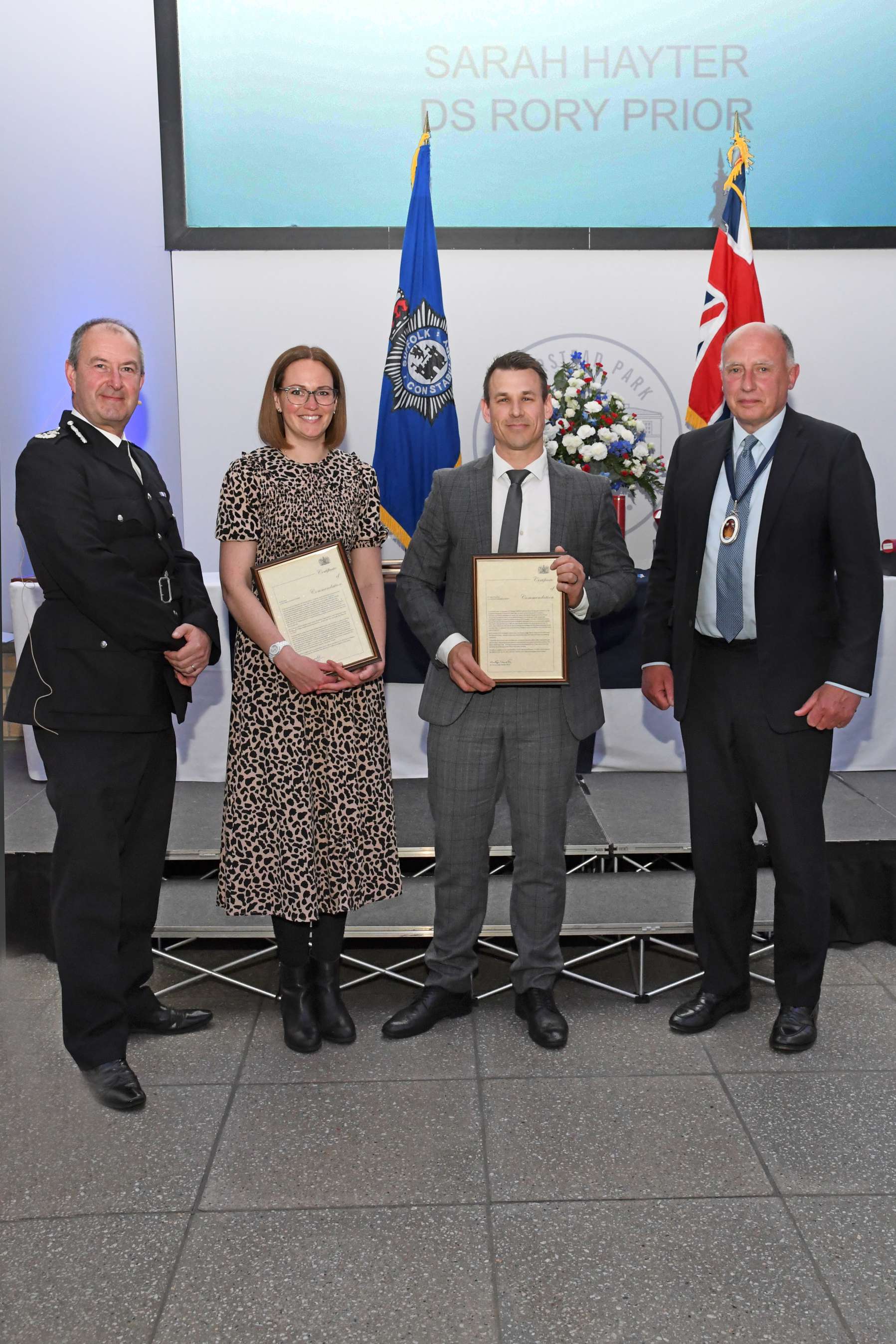 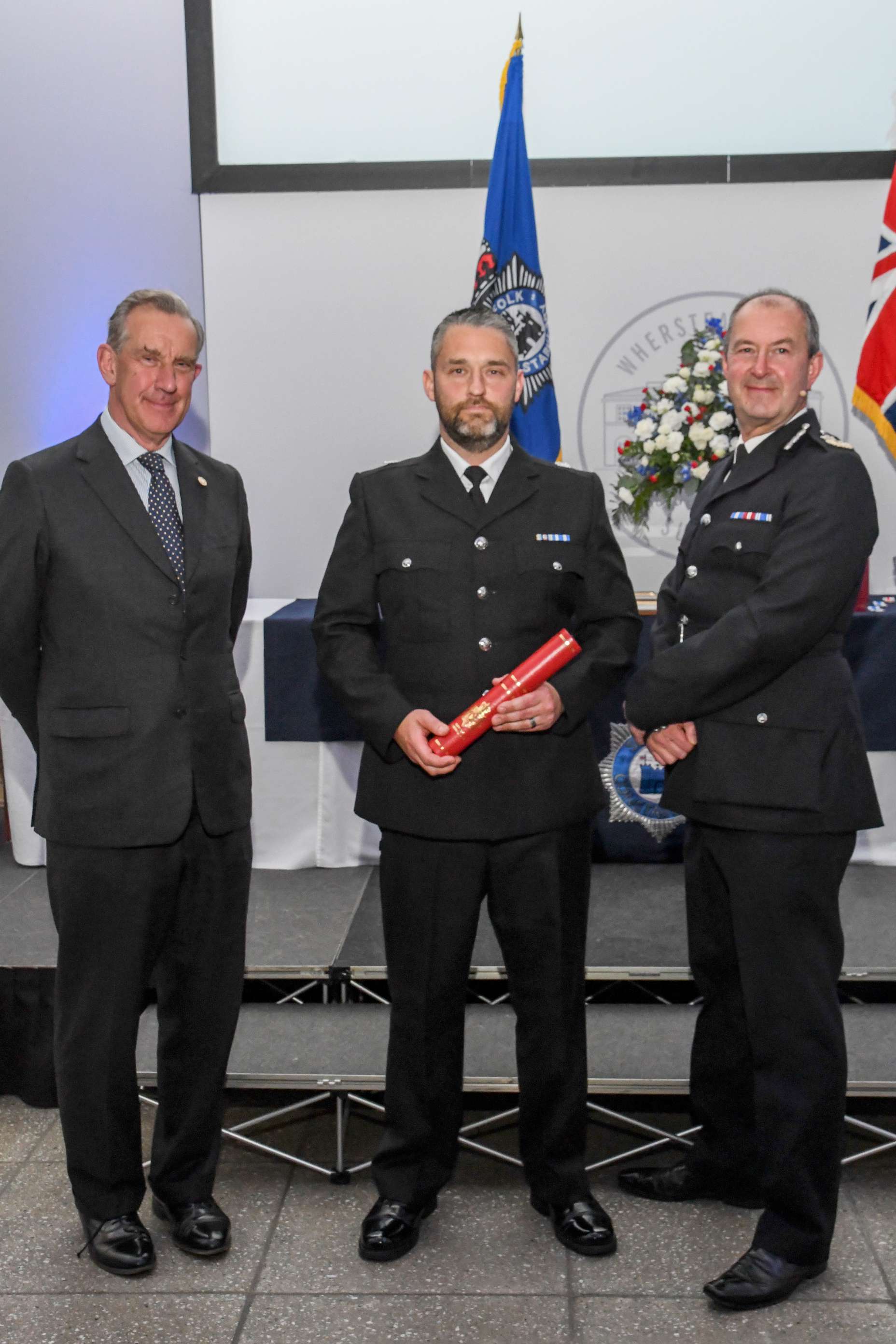 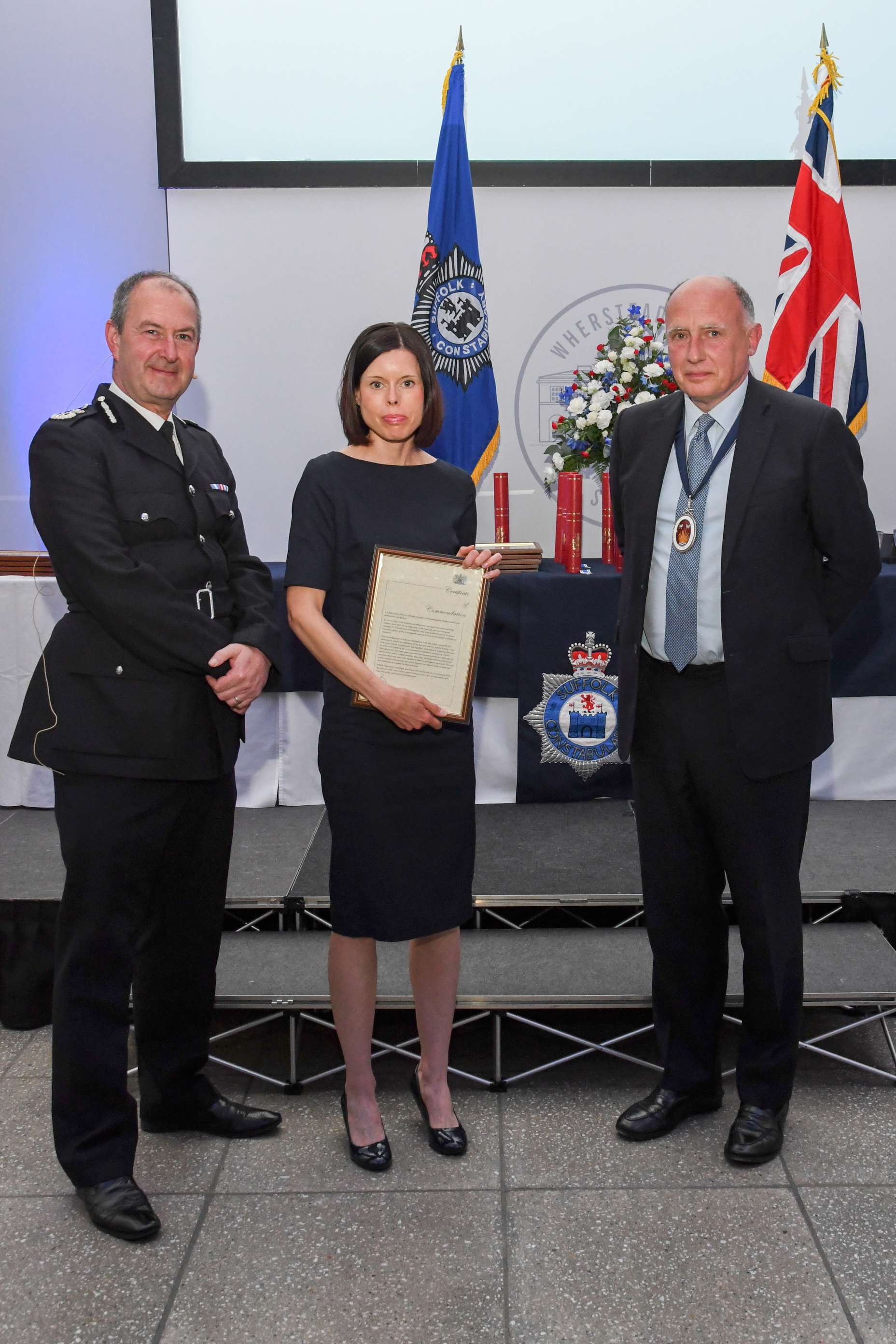 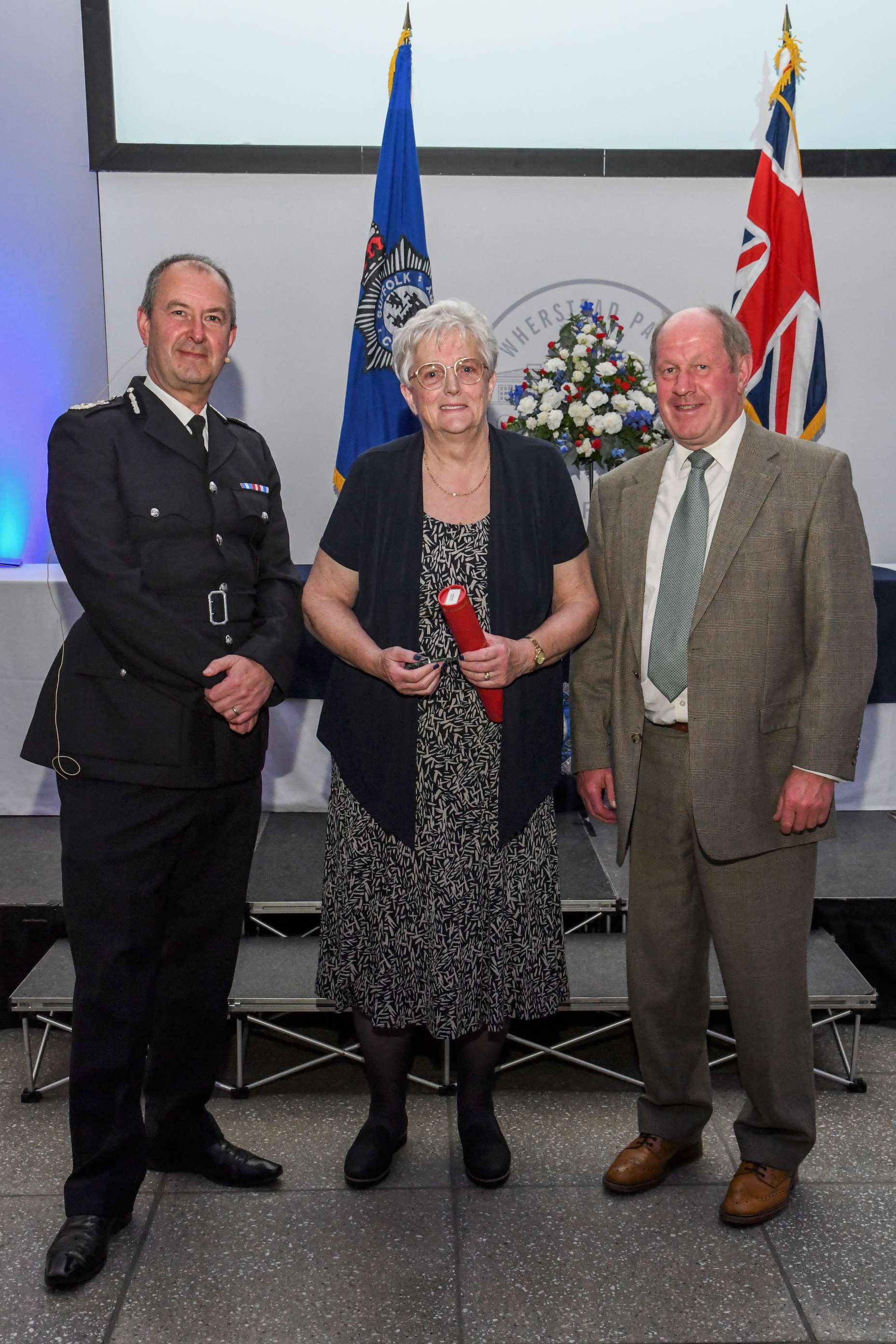 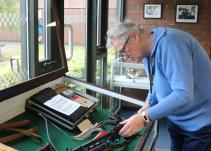 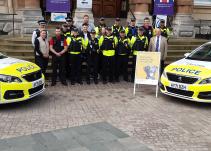 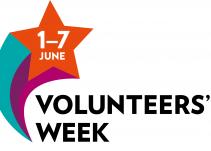 Community
Suffolk says thank you to its volunteers
16 Nov 2021 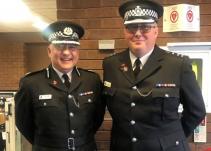