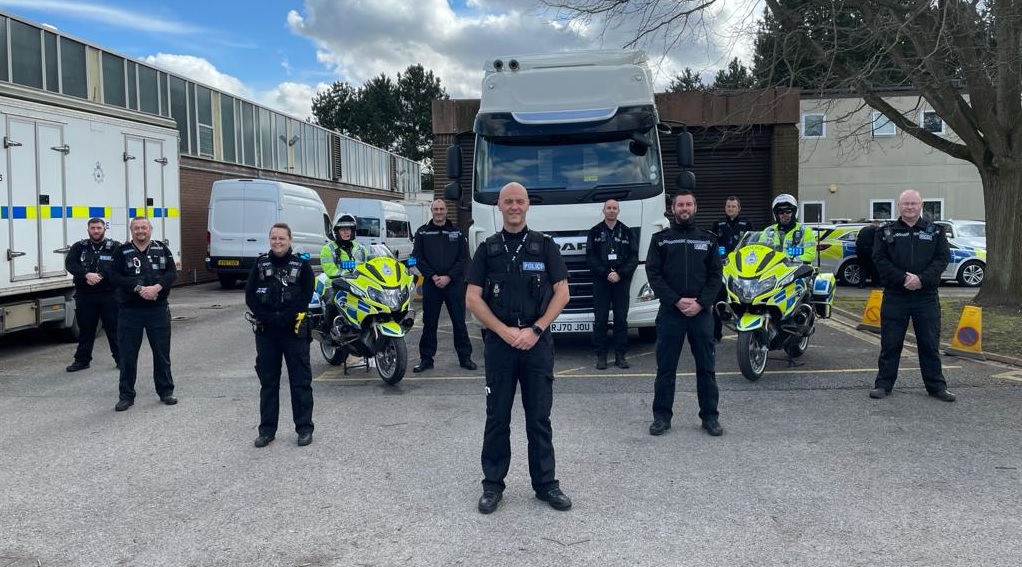 Police in Suffolk stopped over 230 vehicles and detected more than 300 offences, after targeting drivers of Heavy Goods Vehicles (HGVs) as part of a week-long operation supported by National Highways last month.

The initiative took place between Monday 23 August and Friday 27 August and involved officers from the Joint Norfolk and Suffolk Roads and Armed Policing Team, with enforcement taking place on the A14, A11 and A12.

The HGV tractor unit - which was driven by a police officer - provides an ideal vantage point meaning officers can look directly into the cabs of other lorry drivers, whilst also dealing with any offending motorists driving vans or cars too. Supporting police officers are then on hand to pull-over any offenders.

A total of 234 vehicles were stopped, including 103 HGVs and 78 smaller goods vehicles.

304 offences were detected and the drivers in question were issued with Traffic Offence Reports (TORs), some having committed more than one offence.

237 TORs were issued, with the primary offences highlighted below:

This was the third time this year that Operation Tramline has taken place in Suffolk. 967 offences in total have been detected across the three operations, with 779 vehicles stopped by officers.

Sergeant Scott Lee-Amies, of the Joint Roads and Armed Policing Team, said: "The value of the three operations held to date this year is self-evident, with just short of 1,000 offences detected in total and over 750 vehicles stopped.

“It is imperative for us to be able to carry-out enforcement in respect of this group of road users, as they are in control of the biggest and therefore potentially most dangerous vehicles on the roads.

“We are once again very grateful for the support of National Highways in providing us with the HGV tractor unit free of charge, which is making it possible for us to run Operation Tramline more regularly.

“We will continue to do all we can to provide enforcement and education around the ‘fatal four’ main causes of fatal and serious injury collisions, which are drink/drug driving; speeding; using a mobile phone; and lastly, not wearing a seatbelt - which once again has featured heavily in one of these operations.”

Suffolk’s Police and Crime Commissioner, Tim Passmore, said: “I spent some time with the roads policing unit in an HGV cab on a previous campaign and was amazed at what you see when you’re at eye level with another HGV – it really does give officers an excellent view and an opportunity to see offences that might otherwise be missed. I can’t believe that drivers, particularly professional drivers, can risk their lives, their livelihood and the lives of others with such irresponsible behaviour.

“I fully support this pro-active approach to crack down on irresponsible drivers, the number of offences detected is quite staggering.

“It’s very disappointing that drivers still need to be reminded about something so obvious as putting on a seat belt. Everyone knows you are more likely to die in a crash if you don’t wear a seat belt, so I just can’t understand why anyone would flout this law – for such a high number of drivers to be caught without a seatbelt is absolutely shocking.”

He added, “I’d like to thank National Highways for their support, it is greatly appreciated.”

Safety Coordinator at National Highways, Colin Evans, said: “The HGV cab project, which is funded by National Highways, patrols motorways and major A roads with the aim of improving road safety. It provides an ideal viewing platform for police officers to identify dangerous driving behaviour that can be difficult to spot from standard police patrol vehicles – for example texting while driving.

“National Highways is committed to working collaboratively with our partners to improve road safety and we will continue to use the HGV cab to tackle deaths and serious injuries and to encourage people to improve how they drive.”