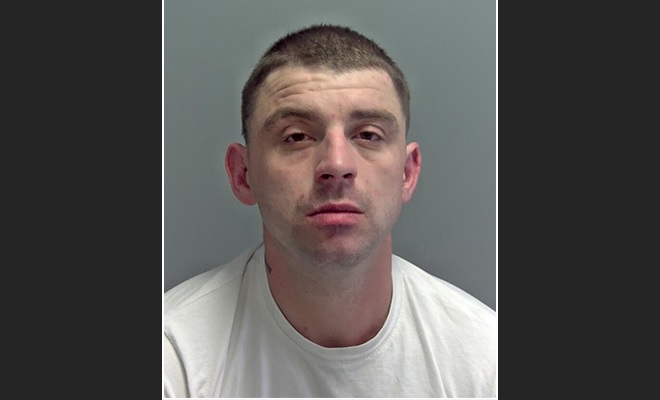 A 29-year-old man has been jailed for almost two-and-a-half years, after admitting his involvement in connection with over 50 burglary and theft offences across Suffolk, Norfolk, Essex and London.

Aaron Crinnion, of no fixed abode, appeared at Norwich Crown Court on Tuesday 2 February, where he was sentenced to 876 days’ imprisonment (two years and almost five months).

Crinnion had previously pleaded guilty to a burglary which occurred on Friday 2 October 2020 at a house in Love Road, Lowestoft, where he forced entry via the front door and stole items including cash and a television.

He also admitted three counts of burglary at business premises in Spitalfields, Norwich, which occurred overnight between 5 and 6 October last year, for which he was given a sentence of nine months’ imprisonment to run concurrently.

In addition to this, he also pleaded guilty to two incidents of theft and was given a further concurrent sentence of six months’ imprisonment.

Whilst on remand in prison for the Lowestoft burglary, Crinnion was visited by Suffolk Police’s Operation Converter Team, who put over 40 further offences to him, comprising 10 in Suffolk, 11 in Essex and 25 in London.

Crinnion admitted to these 46 additional offences and agreed to have them taken into consideration (TIC) by the court.

Nine of the Suffolk offences which were TIC’d occurred in Lowestoft between June and September last year, eight of which were burglaries at business or community premises and included a church, yacht club, football club, restaurant and wine bar.

Of the 11 Essex offences, seven were in Clacton-on-Sea, comprising burglaries at six businesses and one attempted dwelling burglary. The other four offences were either thefts or burglaries, with one offence each in Frinton-on-Sea, Jaywick, Weeley and Witham.

All 11 offences took place between October and November last year, with the exception of the attempted dwelling burglary in Clacton (December 2017) and the theft of a van in Jaywick (August 2018).

DC Barry Simpson, of the Operation Converter Team, said: “Following excellent work by DC Mark Ryczanowski at Lowestoft CID in securing the initial burglary charge and remand, the door was then opened to us to visit Crinnion in prison and put all the other offences to him.

“Through liaison with our colleagues in Norfolk, Essex and the Metropolitan Police, we were able to link and compile this significant number of offences together, which demonstrates a borderless approach to dealing with prolific criminality.

“As part of our enquiries in the Op Converter team, we explore where items of property that were stolen may have gone and efforts to recover these for the victims are always made. Unfortunately, no property was recovered on this occasion.

“The TIC process not only allows us to detect numerous other crimes - that otherwise might remain unsolved – and therefore bring some closure for the victims, it also works to improve the chances for the offender to rehabilitate and be able to leave prison with a clean slate.

“Aaron Crinnion has shown remorse for his crimes and I hope he uses his time in prison to reflect upon them and mend his ways when he is released."

Operation Converter is an initiative aimed at encouraging offenders to admit their crimes.

This has benefits for all – police are able to give victims some peace of mind that an offender has been caught for the burglary of their home or the theft of their property and the individual has the opportunity to clear their slate, so they can have a fresh start when they are released from prison, without the possibility they will later be traced for a further offence.

Offenders have to give sufficient detail for officers to be sure they have committed the crime and these offences are then ‘taken into consideration’ at sentencing.

Two men have been jailed for burglary following a string of offences in Suffolk and across the country.

The non-dwelling burglaries took place between 4 May 2020 and 19 June 2020 and took place at a business called Mowerfix Ltd in Worcestershire, the cricket ground at Ingham in North-Norfolk, Walsham-Le-Willows Sports Club and Bungay and District Sports club in North-Suffolk.

Phillips also pleaded to a further burglary on the 19 August last year in Snape, Suffolk. The total amount stolen in the offences amounted to nearly £40,000 worth of equipment.

During the investigation, the pair engaged with the Op Converter team to secure a further offences that were Taken Into Consideration, which included offending that occurred across the country as far as Devon and Nottingham across a much longer time period going as far back as December 2019.  Phillips had 58 other offences TIC’d, while Moyle had 38 TIC’d.

The pair admitted to targeting churches, community centres, sport grounds and infrequently schools. The break-ins primarily secured gardening tools, lawn mowers and ground maintenance tools, but also took food, fuel and power tools, including site equipment and larger objects including mini diggers and dumper trucks. The approximate value of the amount stolen in these other crimes is thought to be in the region of £122,000.

Their activity caused a great deal of disruption to businesses and services that impacted further on the local communities as well as a great financial drain to some agencies who could ill afford to cover the cost of the loss during the hard times of the Covid 19 lockdown last year.

Investigating officer Ed Vincent of Lowestoft CID said: "I am extremely pleased with the sentence, bearing in mind their guilty pleas and it reflects the seriousness and the prolific nature of the offending and the period of time in which it occurred.

"It was a great piece of team work as well, in particular thanks to our police colleagues as West Mercia and had it not been for their efforts in laying the operational groundwork before their arrest it is strongly believed the pair would have continued in their activities to commit further crimes.

"I should also like to pay tribute to the Op Converter team who travelled considerable distances and worked long days to capture as many offences in the TIC schedule as possible. Thanks also need to be expressed to Hammonds of Halesworth who assisted in the recovery and storage of a large quantity of property recovered from the pair and accelerated the returning of a large number items to various victims which we are continuing to identify and return.”

DC Barry Simpson from the Op Converter team said: "It is very gratifying that the Op Converter process will have seen some closure for many of their victims they preyed on by the fact they admitted other crimes and enable the return of much of the stolen property.”

*The 38 TIC’d by Moyes were joint with Phillips – the other 20 by Phillips were committed on his own.