Two men have been arrested following an assault in Lowestoft.

The incident occurred between 8:45am and 8:55am yesterday, Wednesday 18 May, at Bevan Street East.

The victim, a man aged in his 20s, was unloading a van with another male when they were approached by two men.

One of the men is reported to have then punched the victim several times to the face, causing him to fall into the van he was unloading.

The victim later attended Accident and Emergency at James Paget Hospital having sustained serious injuries to his face and head.

The assault is believed to have followed a verbal altercation between the victim and a man on the High Street earlier that morning.

In the early hours of this morning, Thursday 19 May, police arrested two men, both aged in their 20s and both from Lowestoft, in connection with the incident. They were taken to Great Yarmouth Police Investigation Centre for questioning where they remain.

Police would like to hear from anyone who may have witnessed the incident, or who may have information that may assist with the investigation.

Anyone with information is asked to contact East CID at Lowestoft Police quoting crime reference 37/30268/22 via: 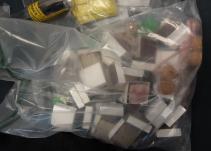