A 23-year-old man has been jailed for two-and-a-half years in connection with County Lines drug offences in Ipswich. 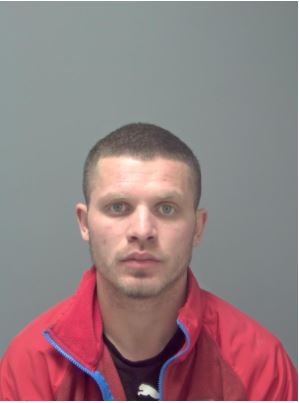 Andrei Mihai, 23, of Crossness Road, Barking, appeared before Ipswich Crown Court, on Wednesday 13 October, where he was sentenced.

Mihai previously pleaded guilty at Ipswich Magistrates’ Court on 8 May to possession with intent to supply cocaine and being concerned in the supply of cocaine.

He also pleaded guilty to driving otherwise than in accordance with a licence and driving without insurance.

Officers from the Sentinel South Team stopped Mihai in a BMW in Church Lane, Sproughton, at around 5.45pm on 6 May.

A search was carried out under Section 23 of the Misuse of Drugs Act and an amount of cash and Class A drugs – Cocaine were found.

Mihai was arrested and was taken to Martlesham Police Investigation Centre for questioning and was later charged and remanded into police custody.

Following an investigation, it was discovered that Mihai had been involved in 235 drug deals over a four-day period and 910 messages concerning drugs had also been found on a mobile phone.

Sergeant Dave Logan from the South Sentinel Team said: “Mihai was stopped and arrested having only been operating within Ipswich a few days. From evidence gathered during the course of this investigation, it is clear that Mihai dealt a significant amount of cocaine during this short time. This type of proactive policing is key in stopping and preventing organised criminals working within Suffolk.”