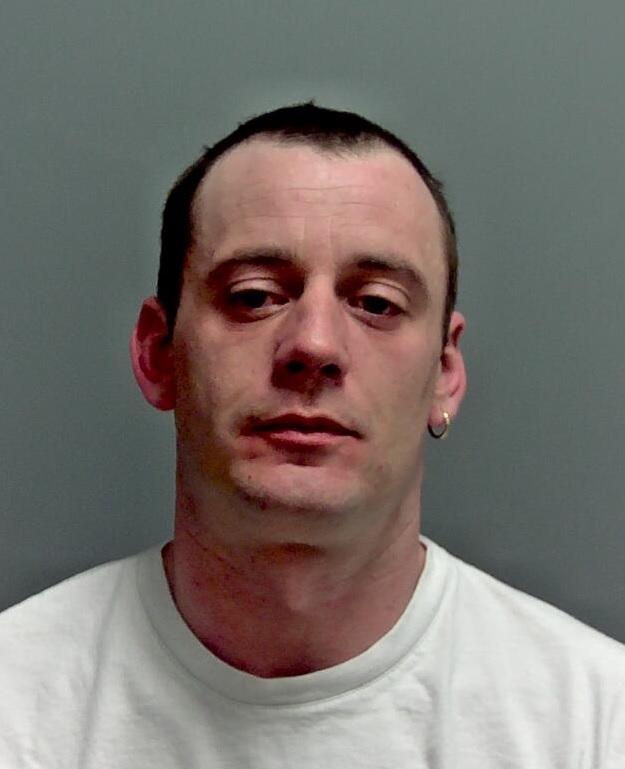 A 32-year-old man has been jailed in connection with armed robbery incidents in Fressingfield, Hoxne and Diss earlier this year, along with a number of bilking offences.

Matthew Thorndyke, of no fixed address, appeared before Ipswich Crown Court today Monday 3 August, where he was sentenced to a total of 8 years 4 months imprisonment. He was given 5 years and 4 months for an armed robbery in Fressingfield  and  3 years for an attempted robbery in Hoxne. Thorndyke was also given a 12 month prison sentence for possession of a bladed article in each incident, both of which will be served concurrently.

Thorndyke had previously pleaded guilty to one count of robbery; one count of attempted robbery; and two counts of possession of a bladed article in a public place, relating to the incidents in Fressingfield and Hoxne.

The first of these offences took place at Mace Stores in New Street, Fressingfield, just before 7.20pm on Wednesday 1 April, when Thorndyke entered the premises brandishing a knife and threatened staff, before stealing a quantity of cash, cigarettes and alcohol. No one was harmed during the incident.

The second crime occurred at around 11.20am on Friday 1 May, at the Post Office in Low Street, Hoxne. Thorndyke again entered the building brandishing a knife and made demands for money, but ran away when a panic alarm was activated. No money was handed over and no one was harmed.

Matthew Thorndyke was initially arrested in connection with this incident later in the day on Friday 1 May at an address in Eye and was taken into custody for questioning, before being released on bail.

He then had a further seven offences taken into consideration (TIC) at the sentencing hearing, which included a robbery at Diss Food and Wine on Tuesday 21 April where a knife was brandished at staff and cash was stolen.

The six other TICs related to making off without payment offences across Suffolk and Norfolk between December 2019 and March 2020 as follows:

Detective Inspector Matt Adams, of East CID at Lowestoft Police Station, said: “The robberies concerned were terrifying ordeals for the victims and I have no doubt that the impact of Matthew Thorndyke’s actions will have been felt much wider within the community, causing other similar business owners to fear they could be targeted.

“Investigating these crimes was a priority for our CID, who worked hard to identify Thorndyke as the offender and gather the evidence required to charge him and remove him from the streets.

“The fact we were also able to get the seven other offences taken into consideration - including a further terrifying armed robbery incident - is another great result for our Operation Converter team, allowing for all these crimes to be detected.

“I am pleased with the sentence passed today and hope it will give Thorndyke the time to reflect on his actions and also act as a deterrent to others who seek to steal from our businesses and threaten people who are going about their work.”

Information on crime prevention and additional security measures for businesses can be found on our website: https://www.suffolk.police.uk/sites/suffolk/files/coronavirus_robbery_advice_revised.docx.pdf

Alternatively, you can contact your Safer Neighbourhood Team for assistance. Details on who your local team are can be found here: http://www.suffolk.police.uk/your-area

Police are appealing for witnesses following an armed robbery at a convenience shop in Fressingfield.

Officers were called shortly before 7.20pm yesterday evening, Wednesday 1 April, to reports that a robbery had just taken place at Mace Stores in New Street.

A man brandishing a knife entered the premises and threatened staff, before stealing a quantity of cash, cigarettes and alcohol. No one was harmed during the incident.

The suspect is described as white, aged in his late 20s to early 30s, approximately 5ft 7in tall and of slim build. He was wearing a black hooded top and had his face covered.

Detectives are appealing for anyone with information about this incident to come forward. They are also asking anyone who was driving in the area between 6.30pm and 8pm yesterday evening and who may have captured dashcam footage of any vehicles travelling through to get in touch.

Detective Inspector Matt Adams said: “Unfortunately there have now been a number of similar robberies to this one over the past 10 days across the county and we understand that this will be causing concern for employees and business owners alike.

“I would like to reassure all those people affected that we are working extremely hard to detect who is responsible for these offences, with our teams gathering forensic evidence and pursuing a number of leads, which have resulted in us making several arrests.

“Local communities can be of great assistance to us by being our eyes and ears – especially at the moment while the majority of people are at home. Please be vigilant and report anything to us that you believe to be suspicious.

“Any businesses that feel they would benefit from advice on crime prevention and additional security measures are urged to contact their local Safer Neighbourhood Team for assistance.

“Officers are actively patrolling throughout communities in Suffolk, and we are determined to do everything we can to protect the public, key workers and businesses."

Any witnesses to this crime, or anyone with information or dashcam footage, are asked to contact East CID at Lowestoft Police Station, quoting reference: 19207/20.