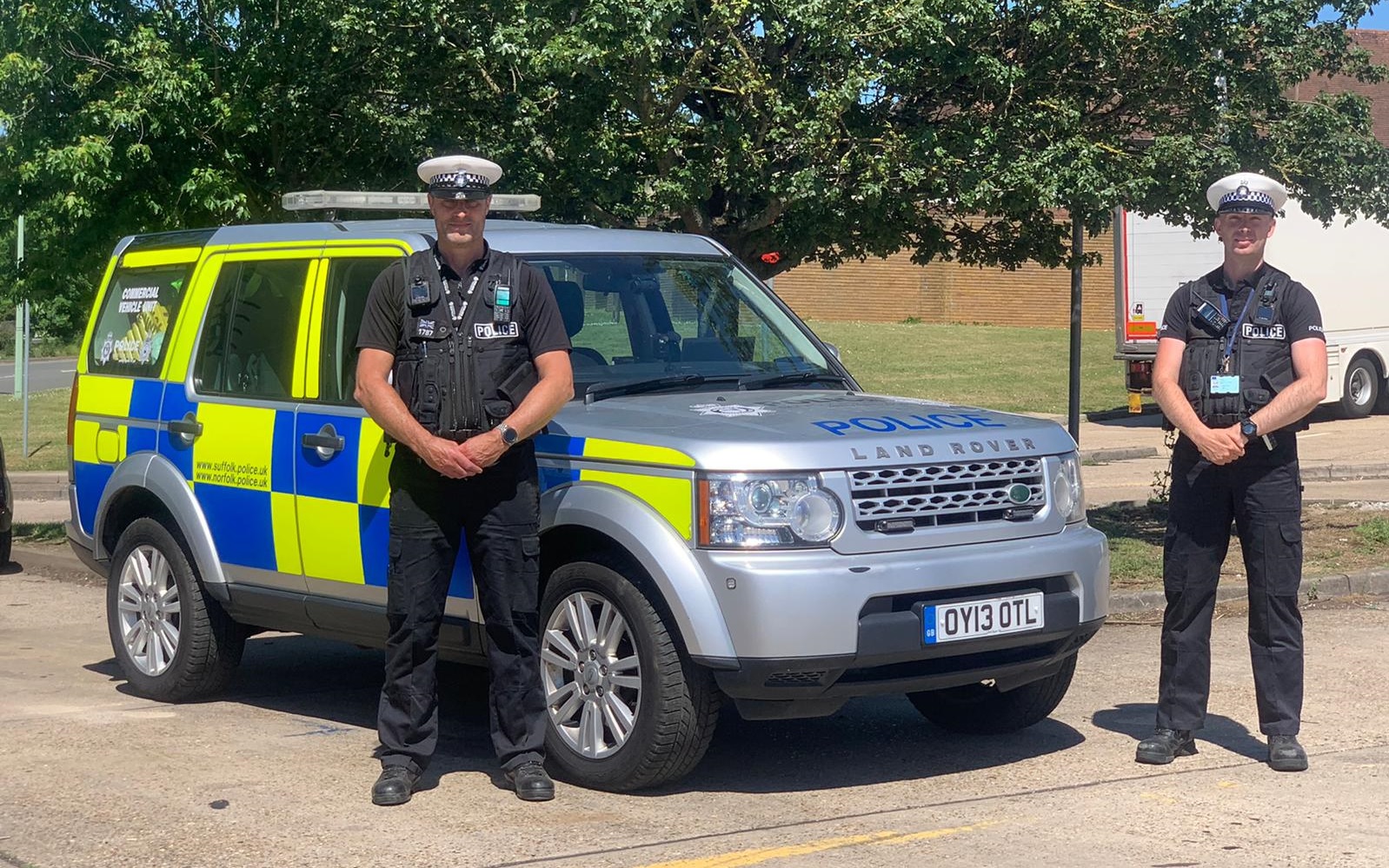 A new team dedicated to policing commercial vehicle use across Suffolk - particularly in respect of the strategic road network and the significant volume of goods vehicles generated by the Port of Felixstowe - has detected over 1,000 offences since it was launched late last year.

The Commercial Vehicle Unit (CVU) went live on 23 November 2020 and provide specialist enforcement, knowledge and investigative capability in respect of commercial vehicle activity, alongside contributing towards improving the safety of all those using the roads in Suffolk.

The unit is attached to the Roads and Armed Policing Team (RAPT), consisting of two police officers – PC Wayne Sturman & PC Terry Harvey - in the roles of Commercial Vehicle Enforcement Officers, who are supervised by a RAPT sergeant.

In just over seven months the unit has stopped 969 vehicles, dealt with 1,436 offences and issued £181,950 in fines. 189 vehicles were prohibited from the roads, 80 were immobilised and 222 given warnings. These were all for a variety of offences including being overweight, mechanical reasons/condition, insecure loads, tachograph infringements, carrying dangerous goods, abnormal loads and agricultural vehicles.

The officers are stolen vehicle and stolen plant trained examiners and have the ability and hardware to identify vehicles along with trailers, caravans and machinery. They also carry mobile weighing equipment that can weigh a vehicle at suitable locations. They can examine vehicles and have the power to prohibit a vehicle should it be unroadworthy.

PC Harvey is the constabulary dangerous goods safety adviser and is chair of the National Carriage of Dangerous Goods Practitioners Forum. Both officers conduct inspections of vehicles carrying dangerous goods on Suffolk roads and have found out of the 52 checks in 2021 over 60% of vehicles have failed to comply with regulations.

The unit is also responsible for taxi checks throughout the county and have conducted two evenings of action so far in Ipswich and West Suffolk (more of these would have taken place but have been limited by Covid-19 restrictions). Going forward the intention is to have a minimum of one evening per month in a different local authority area and invite the licensing officers along. They will also begin to conduct bus and coach checks at various locations in the coming months.

Two vehicles have been stopped relating to vehicles linked to haulage companies that have failed to pay fines for allowing illegal immigrants to enter the UK. When these vehicles are stopped the company has to pay the fine at the roadside, which can amount to several thousand pounds. Failure to do so results in the vehicle being seized. 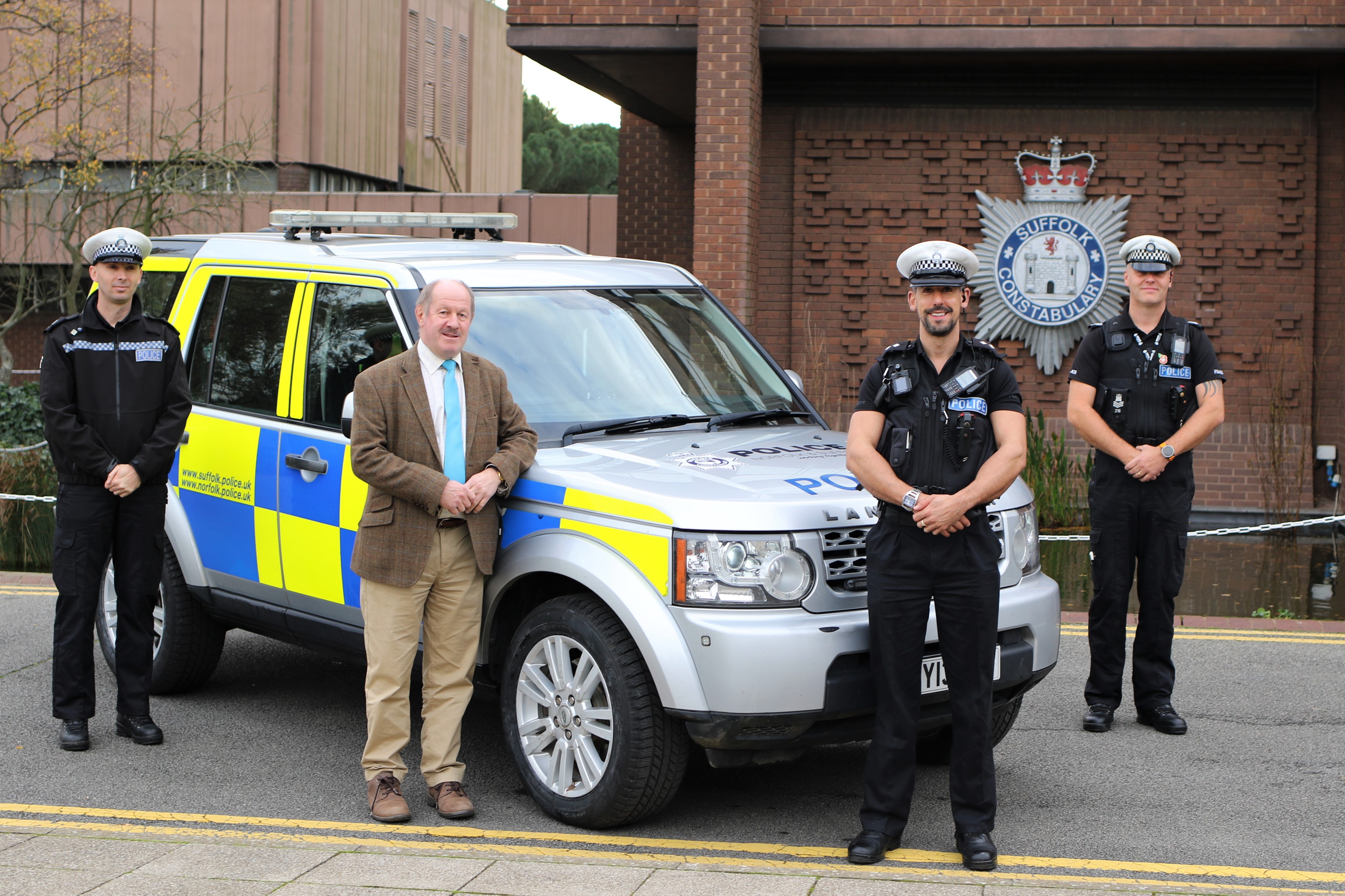 Pictured at the launch of the CVU in November 2020, left to right, is: PC Terry Harvey; PCC Tim Passmore; Insp Gary Miller; and Sgt Scott Lee-Amies

The unit also participates in or organises the numerous RAPT operations and days of action, including Operation Tramline – for which police are provided with an HGV tractor unit by Highways England, allowing officers to carry out patrols across the strategic road network and focus on offences committed by lorry drivers.

This is in addition to assisting other colleagues within Suffolk Police such as Safer Neighbourhood Teams; CID (with the identification of stolen vehicles and investigation into illegal entry into the UK); and assisting at the scenes of collisions involving commercial vehicles.

Inspector Gary Miller, of the Roads and Armed Policing Team, said: “The work undertaken by PCs Sturman and Harvey in the CVU in just over seven months is exceptional.

“For two officers to have stopped more than 900 vehicles in that time - detecting over 1,000 offences in the process - is a phenomenal effort that clearly demonstrates the importance of this unit and justifies its creation.

“Commercial vehicle users are professional drivers and account for a huge percentage of the miles travelled on our road network. As such they have extra responsibilities to ensure their vehicles are roadworthy and they are fully compliant with all relevant legislation.

“The dedicated resource and specialist knowledge that the CVU officers provide to us as a constabulary is invaluable. Their work is helping to improve the safety of our roads for everyone by reducing the likelihood of these vehicles being involved in serious or fatal collisions.”

Tim Passmore, Police and Crime Commissioner for Suffolk, said: “I am delighted to see the latest results from the relatively new commercial vehicle unit. These officers are doing a fantastic job and the results are quite remarkable.

"This targeted roads policing unit was funded by the policing precept of last year’s council tax and it has had tremendous success to date as these latest figures show.

“Keeping our roads safe and the traffic moving is so important, particularly on the A14. The A14 is a vital national gateway to the Port of Felixstowe – the largest container port in the country and we have a huge amount of commercial traffic which needs to be monitored for dangerous vehicles and driver offences.”