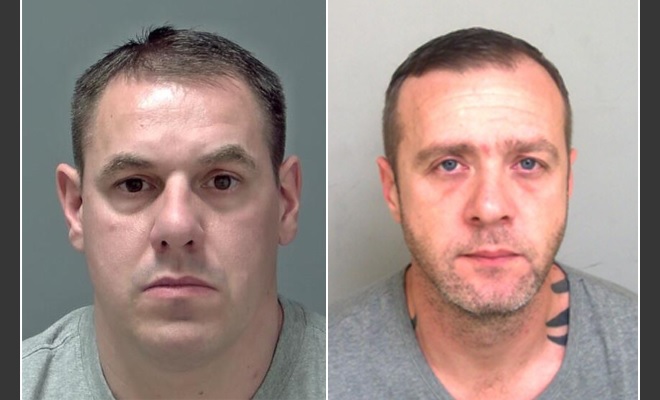 Two men from Essex have been jailed for a combined total of eight years after admitting a series of burglaries at business premises across Suffolk and Norfolk.

Jamie Channon, aged 41, and Tony Moore, aged 37 appeared at Ipswich Crown Court on Thursday 5 December, where they were each sentenced to four years’ imprisonment.

Channon, of Chadfields in Tilbury, and Moore, of Sycamore Close, also in Tilbury, had both pleaded guilty to conspiracy to commit burglary, in relation to a number of break-ins or attempted burglaries at convenience shops and a filling station shop.

The offences took place earlier this year, between 6 September and 14 October, at the following locations:

They successfully forced their way into every premises except the Spar in Woodbridge, stealing over £25,000 worth of cigarettes and tobacco in the process.

Their crimes eventually caught-up with them when they were arrested on Monday 14 October. In carrying-out the burglaries at the Shell Garage on the A11 and the Co-op in Leiston (both of which took place in the early hours of that morning), they used a Ford Mondeo which had been stolen from Cranham near Upminster, at some point between 5 and 6 October.

When they broke into the Co-op in Leiston at around 2am on 14 October, a burglar alarm was activated and security cameras at the premises detected the vehicle they had travelled in.

Police officers located the vehicle in the Stonhams as it turned onto the A140 from the A1120. A pursuit then ensued, with the suspect vehicle reaching speeds of 120mph in a 50mph zone.

At the junction with the A14 at Beacon Hill, the Mondeo went the wrong way around the roundabout, then entered the eastbound carriageway travelling in the wrong direction. The police vehicle followed on the correct side of the carriageway and located the Mondeo coming to a stop in Creeting St Mary, where two people were seen to run away from the car.

A police dog unit arrived soon after and followed a scent along a track where a balaclava and jacket were found, but the suspects were not located. The Ford Mondeo was seized and in the boot two duvet covers full of cigarettes and tobacco were found.

Also discovered in the car were a set of tools, razors, gaffer tape and some stolen number plates.

Acting Detective Inspector Craig Powell, of the Serious Crime Disruption Team, said: “Jamie Channon and Tony Moore caused the businesses affected significant financial harm during their mini crime-wave – which all took place in under six weeks - but their crimes eventually caught-up with them.

“Suffolk is not a soft-touch and we will pursue and prosecute anyone who thinks they can target our retailers in this way, or indeed any of our businesses.

“We have a number of tools at our disposal to catch offenders such as Channon and Moore, whether it is CCTV, forensic evidence or Automatic Number Plate Recognition, and criminals should be in no doubt that we will make full use of them to ensure successful convictions at court.”

Police have charged a man in connection with a burglary that took place in Leiston.

It follows a burglary that took place on Sizewell Road at the Co-Op Solar store on Monday 14 October where a large quantity of cigarettes and some razor blades were stolen in the incident.

A man in his 30s was arrested in Essex on suspicion of burglary on Thursday 28 November and taken to Marltesham Heath Police investigation Centre for questioning.

Tony Moore of Ottawa Road in Tilbury was charged with burglary on Friday 29 November and remanded to appear before Ipswich magistrates court on Saturday 30 November.

A second man, 40 year old Jamie Channon of Chadfields in Tilbury was charged on Wednesday 6 November in connection with the same incident with burglary and remanded after appearing in court on 7 November.