Over 300 offences detected during operation targeting drivers of HGVs 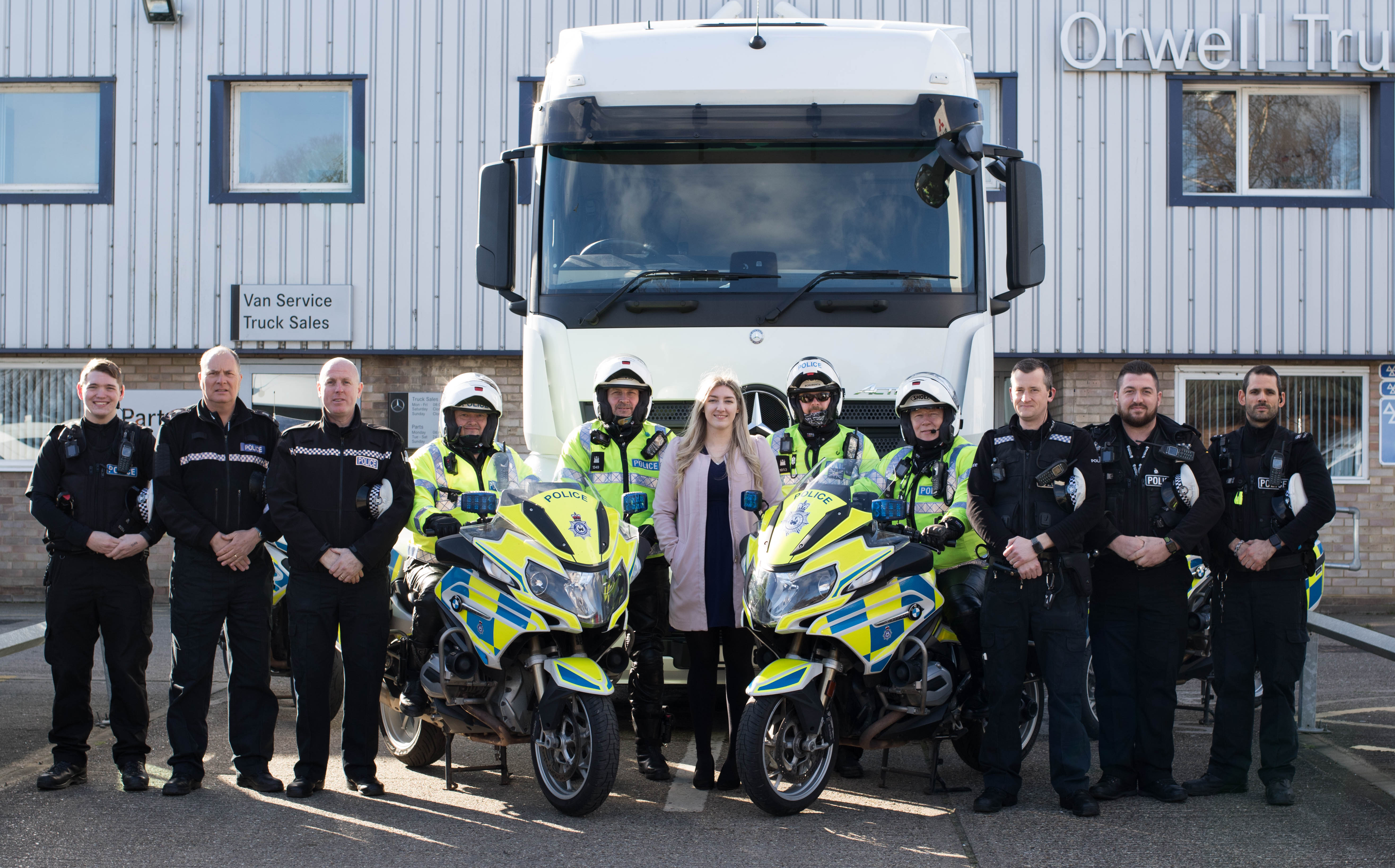 Police in Suffolk have issued over 300 Traffic Offence Reports (TORs) after targeting drivers of heavy goods vehicles as part of an operation which coincided with a two-week nationwide seatbelt enforcement campaign.

As part of Operation Wyken, police were provided with a cab section of an HGV from Orwell Trucks, which allowed officers to carry out patrols on the A14, A12 and A11 targeting motorists including lorry drivers. This took place between Monday 11 March and Wednesday 20 March.

This ran in conjunction with both a two-week National Police Chiefs’ Council seatbelt campaign (11-24 March) and a week-long Europe-wide TISPOL campaign (11-17 March).

The cab, which was driven by a police officer, provides an ideal vantage point meaning officers can look into cabs of other lorry drivers or looking down at cars or vans. A team of roads policing officers accompanied them to stop any offenders.

During the operation the Roads and Armed Policing Team (RAPT) and the Road Casualty Reduction Team (RCRT) detected 313 offences as follows:

- 225 for not wearing a seatbelt (the majority issued to HGV drivers)
- 59 for using a mobile phone
- six for driving not being in proper control of the vehicle
- three careless driving offences
- three registration offences
- two no MOT
- two no secondary coupling
- two carriage of dangerous goods offences
- one each of the following: dangerous condition; exposed tyre cord; no amber beacon; no driving licence; one PG9 prohibition; and one for tachograph offences
(All of the above were issued with TORs)
- two people were also arrested: one on suspicion of drug-driving; and one on a warrant for failing to appear at court

Sergeant Julian Ditcham, of the Roads and Armed Policing Team and who led the operation, said: "Due to the physical height of commercial vehicles, it is often difficult for patrol officers to view into the cab and thereby detect offences such as not wearing a seatbelt or using a mobile phone.

"The HGV cab provides officers with an ideal vantage point to spot drivers committing offences and provides us with another means to enforce the law with this specific group of road users, who due to the size of the vehicles they are in control of, pose an added risk to other motorists and also themselves if they are committing offences whilst driving.

“Wearing a seatbelt can prevent many collision-related injuries and fatalities and it is compulsory for drivers to wear them, and they should ensure their passengers buckle-up too. Using a mobile phone distracts drivers and increases their chances of being involved in a serious of fatal collision.

"We would also offer our thanks to Orwell Trucks for once again supporting this road safety campaign, which we have run for a number of years now and will continue to do so.”

Suffolk’s Police and Crime Commissioner, Tim Passmore, said: "I fully support the Constabulary’s campaign to crack down on irresponsible drivers who still refuse – despite all the public messages - to buckle up whilst driving, but it amazes me that drivers should need to be reminded about something so obvious.

"I spent an hour or two with the roads policing unit on a previous operation and was amazed at what you see when you are at eye-level with other HGVs – it’s absolutely staggering. I can’t believe that professional drivers can risk their lives, their livelihood, and the lives others, looking at their phones and not wearing seatbelts. It’s shocking.”

Seatbelts should be worn in any vehicle they are provided in, including buses and goods vehicles.  Anyone caught not wearing a seatbelt may be issued with a TOR (Traffic Offence Report) and face a fine, points on their licence or even court action.