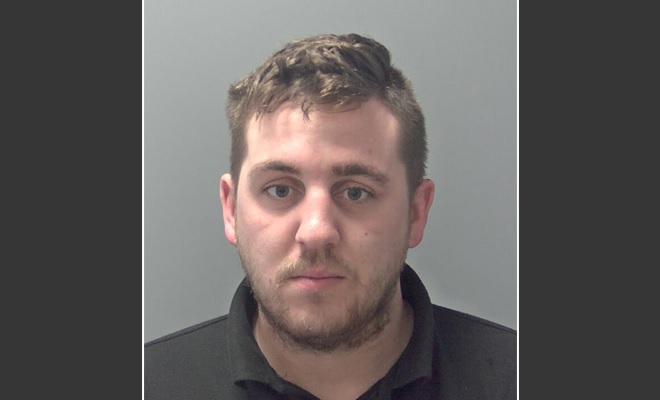 A 25-year-old man from Cambridgeshire has been jailed for a number of motoring offences, including dangerous and drug driving, following a police pursuit which began in Newmarket.

Ryan Bloor, of Eagle Way, Northstowe, appeared at Ipswich Crown Court yesterday Thursday 16 January, where he was sentenced to 14 months’ imprisonment and disqualified from driving for two years and seven months. He will also be required to take an extended re-test.

Bloor had pleaded guilty at Ipswich Magistrates’ Court on Tuesday 10 September to the following four offences: dangerous driving; drug-driving (cocaine); driving without insurance; and driving otherwise than in accordance with a licence.

The charges relate to an incident which occurred on Wednesday 13 February 2019, when at 9.15pm officers from the Roads and Armed Policing Team attempted to stop a black Mercedes A180 on Fordham Road in Newmarket, for a routine document check.

The police vehicle’s blue lights were illuminated and the Mercedes braked and signalled as if intending to pull over, before slowing down and then driving off at high speed.

The Mercedes reached speeds of up to 60mph in a 30mph zone as it continued north along Fordham Road, overtaking another vehicle and then going the wrong way around the roundabout at the junction with Oaks Drive and Studlands Park Avenue.

The police vehicle pursued the Mercedes onto the A14 westbound at junction 37 and at the approach to the A14/A11 split, two of the three lanes were closed due to roadworks resulting in the Mercedes forcing its way past another vehicle in lane one and then having to commit to joining the A11 southbound.

During the pursuit the Mercedes reached a top speed of 115mph, with a speed of 110mph recorded when travelling through a 50mph section of roadworks on the A11. It then exited the A11 at The Wilbrahams at 9.23pm, before being located by police around five minutes later having crashed at Camgrain in Linton. This moment was captured on the dashcam of a lorry which was parked there.

The vehicle was unoccupied when the officers located it, but following a search of the area assisted by the Police Dog Unit and a National Police Air Service helicopter, Ryan Bloor, along with a woman who had been a passenger in the Mercedes, were found hiding in bushes off Balsham Lane at around 9.50pm.

Bloor was then arrested by officers and after he was cautioned admitted that he had been driving the vehicle. He subsequently failed a drug wipe, providing a positive reading for cocaine. When the drug test results came back, he was found to have had more than eight times the legal limit of benzoylecgonine in his blood.

PC George Laflin, of the Roads and Armed Policing Team and the officer who was driving the pursuing police vehicle, said: “Ryan Bloor’s driving was completely reckless and put the lives of other road users at risk.

“The fact that he was more than eight times over the drug-drive limit compounds the fact that he was performing dangerous manoeuvres such as going the wrong-way around a roundabout, driving at 60mph in a 30mph zone, and 115mph on a dual carriageway.

“Bloor’s actions gained him nothing other than increasing the number of offences he committed, which in turn has earnt him a prison sentence. Other motorists tempted to refuse to stop for police officers would do well to heed this outcome and realise it is not worth doing it.

“Excess speed and drink and drug-driving are one of the four main causes of serious and fatal road traffic collisions, and we will continue to proactively target drivers posing a risk to other members of the public.”