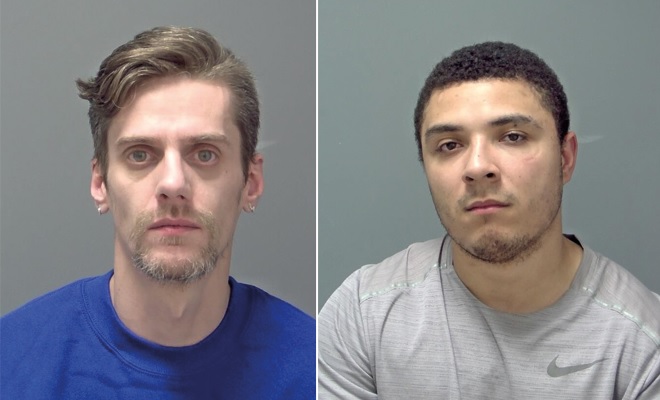 Two men from Ipswich have been jailed for over four months after being caught in the act of burgling a business premises in the town.

Lee Gaywood, aged 37, and Leroy Clarke, aged 30, appeared before Ipswich Magistrates’ Court on Wednesday 15 January, where they were each sentenced to 18 weeks’ imprisonment.

Gaywood, of Fen Bright Circle, and Clarke, of no fixed address, both pleaded guilty to burglary with intent to steal. Gaywood also admitted an additional offence of receiving stolen goods.

The burglary offence relates to a break-in at a hairdressing salon in Felixstowe Road, which occurred during the night of Monday 13 January.

Police were called at around 11.50pm by a member of the public reporting they had heard the sound of glass breaking at the salon and could hear voices coming from inside the address.

Officers arrived at the scene within a matter of minutes a discovered broken glass on the floor, a hole in the door and could see people moving around inside.

On entering the building, they found both Gaywood and Clarke inside and numerous items, including hair-straighteners and hairdryers, had been moved and placed inside towels in readiness to be stolen.

When Gaywood was searched a key to a Volvo vehicle was found in his pocket. Following a search of the surrounding area, officers located the car this key unlocked, which had been parked in Osborne Road.

This vehicle was found to have been using false number plates and was stolen during a burglary at a house in Nacton Road on 5 December last year. Gaywood admitting receiving stolen goods in relation to the acquisition of this vehicle on 13 January.

Detective Inspector Dan Connick, of South CID, said: “Thanks to the vigilance of the member of the public who called this incident in and the quick response of the officers who were out on patrol in the local vicinity, Gaywood and Clarke were caught red-handed.

“This prevented the salon from being deprived of hundreds of pounds worth of equipment, but unfortunately they were still left with a significant amount of damage to the premises, which not only has to be repaired, but causes disruption to the business.

“Clarke in particular is a prolific criminal and the likes of him and Gaywood may think these types of crime are victimless, but they absolutely are not. They have a huge impact on small businesses and the people who have worked extremely hard to build them up and keep them running. We will continue to work tirelessly to apprehend these offenders and put them before the courts.”