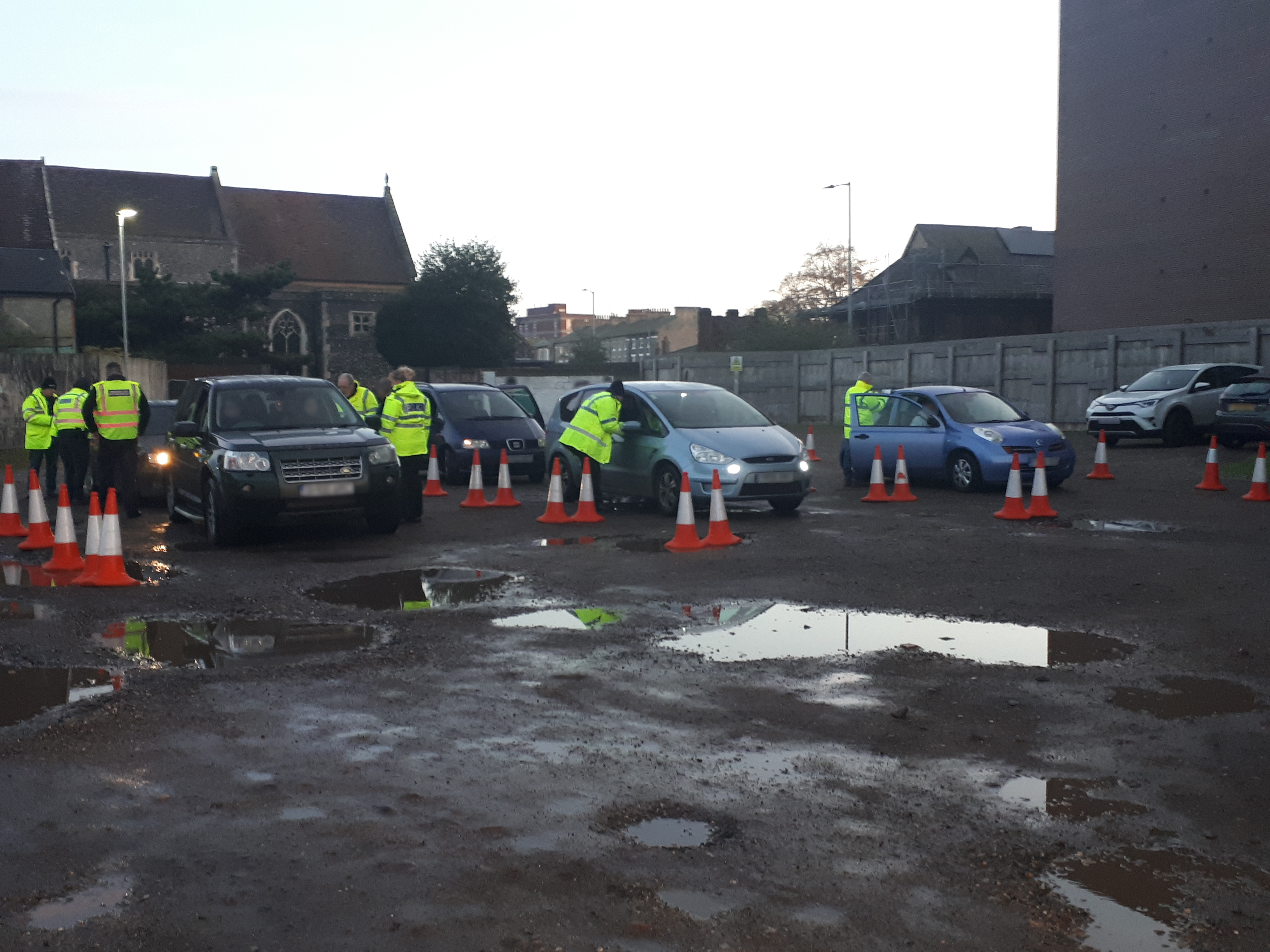 The proactive week of policing, which started on Monday 11 November and concludes today, Friday 15 November, has included officers from across the force carrying out warrants, making arrests and also safeguarding vulnerable people.

Throughout the week, 14 warrants have been executed at a number of addresses in Ipswich and 21 people in total have been arrested for various offences so far.

Multi-agency days of action were also conducted during the week in the town with the aim of disrupting and frustrating the activities of criminals, including organised crime groups, who commit offences across county borders whilst using the road network.

Vehicles identified as being potentially involved in criminality were brought back to the check site on Monday, where police and partner agencies conducted checks of the vehicles and occupants.

The operation was carried out by officers from the Roads and Armed Policing Team, the Road Casualty Reduction Team, together with the Sentinel Team as well as a number of partner agencies including the Driver and Vehicle Standards Agency (DVSA), HM Revenue and Customs (HMRC), Trading Standards, Driving and Vehicle Licensing Agency (DVLA) and Ipswich Borough Council, among others.

95 vehicles were escorted back to the site, with just 17 leaving clear of any offences. 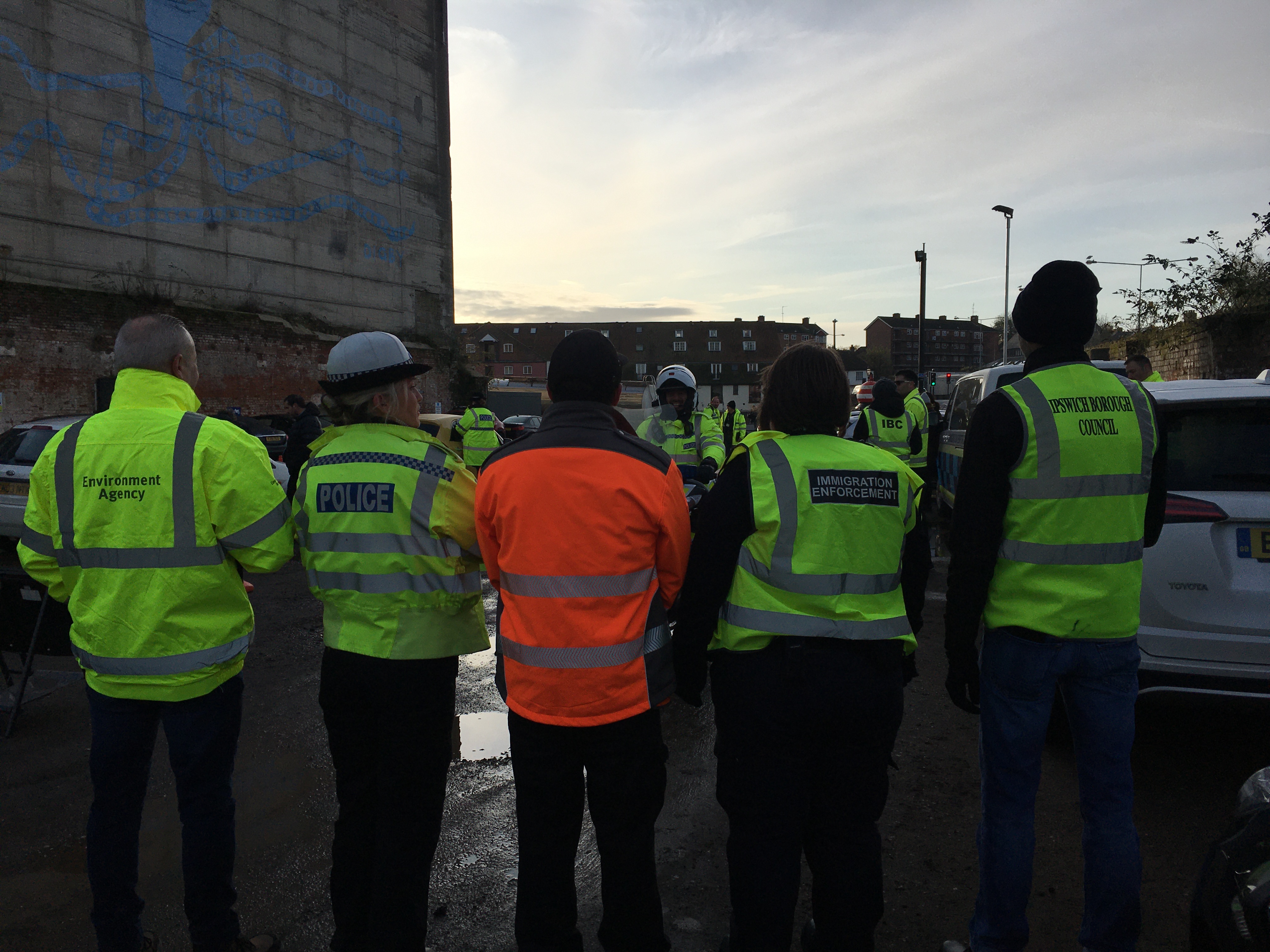 Four people were arrested on suspicion of drug driving offences, one for driving whilst disqualified and one person for driving with no insurance.

71 Traffic Offence Reports (TORs) were issued for various offences including for the following: 12 for wearing no seatbelts, three for using a mobile phone, two for no MOT, four for driving without a licence and four for having defective tyres, among other offences.

On Wednesday, officers from across the force, worked together with various partners at another multi-agency check site held at a different location in the town, with the aim of tackling modern day slavery offences, the exploitation of vulnerable people and road-related crime.

From 6am until 8am, 24 vehicles with 74 occupants were brought into the site where safe and well checks were carried out. Officers were supported by partner agencies from Immigration Enforcement and the Gangmasters and Labour Abuse Authority.

GLAA Director of Operations Ian Waterfield said: “Working in partnership is the only way we can truly tackle the problem of modern slavery and labour exploitation at source.

“We have an excellent relationship with Suffolk police allowing us to work together to protect some of the most vulnerable people in the county and target the criminality behind this exploitation.

“As intelligence-led organisations, we rely on the public’s help to spot the signs of exploitation and report their concerns to us. If you suspect something is not right, let us know and we can investigate.”

Further vehicle checks were carried out at the site from 8am until 3.30pm, with a total of 112 vehicles being brought in during the course of the day. 10 vehicles left the site clear of any offences.

Five people were arrested including for driving without insurance, on suspicion of drink driving, for holding no insurance and for immigration offences, among other offences.

66 TORs were issued for various offences including for the following: 15 for no insurance, 17 for no seatbelts, four for using a mobile phone, three for having no MOT, six for no driving licence, among other offences.

15 vehicles were seized and two immediate prohibitions were issued for vehicles having defective tyres or for being in a dangerous condition.

Partner agency, DVLA recovered almost £4,000 in fines and Marston debt recovery collected around £13,000 in fines. A further £460 was collected by Ipswich Borough Council for other fines.

Detective Chief Superintendent Steve Mattin said: "This week of action has been all about proactively tackling those involved in trafficking drugs, violence and the exploitation of vulnerable people across the county.

“This was an intelligence-led operation with a number of officers and partner agencies all working together in order to disrupt and pursue criminals, to protect our communities from harm.

“At this time, 21 people have been arrested and they are at various stages of legal proceedings. We thank the public for their understating and cooperation while this action was taking place, and hope that this positive action demonstrates our commitment to bringing those involved in criminality to justice.

“Apart from the arrests and seizures made, the week has also enabled us to gather plenty of significant intelligence – this will prove to be very valuable as we plan for future warrants and operations to continue to catch criminals and keep our communities safe.”

If you are aware of any suspicious activity taking place in your community, please let us know by calling 101, or 999 in an emergency. You can also report an incident online by visiting: http://www.suffolk.police.uk/contact-us/report-something