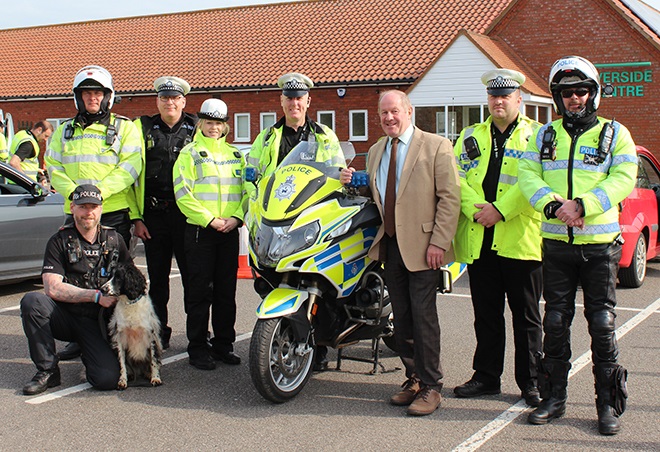 Five people were arrested and over 70 vehicles were stopped during a multi-agency day of action in East Suffolk this week.

Operation Showdown took place on Tuesday 7 May, with the aim of disrupting and frustrating the activities of criminals, including organised crime groups, who commit offences across county borders whilst using the road network.

Operating from a check site in Stratford St Andrew, officers patrolled the A12, and also deployed into Leiston and Saxmundham. Vehicles identified as being potentially involved in criminality were brought back to the check site, where police and partner agencies conducted checks of the vehicles and occupants. Not every vehicle was brought back to the check site, with some minor offences dealt with at the roadside.

A total of 73 vehicles were stopped, 53 of which were escorted back to the check site, with just nine of those leaving the site clear of any offences.

Five people were arrested as follows: a 63-year-old man and a 32 year-old man – both from Ipswich – were arrested on suspicion of possession of criminal property. This was after a Ford Transit van was stopped due to vehicle defects and a number of catalytic converters, vehicle batteries and cutting equipment was found inside. The van was subsequently seized under the Proceeds of Crime Act.

All five men were taken to Martlesham Police Investigation Centre for questioning and were released under investigation pending further enquires.

48 Traffic Offence Reports were issued as follows: 14 for not wearing a seatbelt; six for tinted windows; five for no MOT; five for not being in proper control of a vehicle; five for speeding; three for number plate offences; two for defective lights; two for defective mirrors; and one each for no insurance; using a mobile phone; defective tyres; insecure load; defective windscreen; and no secondary coupling.

The Safety Camera Partnership detected 53 speeding offences whilst stationed at locations on the A12 in Pettistree, Marlesford and Yoxford.

The DVSA issued two immediate prohibitions, taking those vehicles off the road straight away; three delayed prohibitions; and 17 advisory notices.

The DVLA clamped 10 vehicles for not having tax and recovered 2,600 in fines. They also recovered £320 from four warning stickers, totalling £2,920 in monies recovered. Marstons civil debt collectors recovered outstanding fines of approximately £4,000.

HMRC challenged 16 vehicles checking for illegal fuel and no offences were found and DFBB made 15 referrals.

Sergeant Julian Ditcham, of the Roads and Armed Policing Team, said: “This was the first time we have conducted one of these operations in this part of Suffolk, and it proved to be just as productive as the ones we have held in and around the larger towns in the county.

“The offences dealt with by our officers, combined with the speeders detected by the Safety Camera Team, total over 100 vehicles found using the roads that day either breaking the law, or being used with a defect.

“In addition to the 44 vehicles found to have offences and the arrests of the three suspected drug-drivers, of particular note are the arrests of the two people on suspicion of possession of criminal property and the subsequent seizure of the van found to contain catalytic converters, vehicle batteries and cutting equipment.

“This is obviously now subject to further enquires and the people arrested remain under investigation, but the primary aim of these operations – in addition to detecting driver and vehicle offences – is to identify any vehicles using the road network which are potentially involved in criminality.

“Although many offending motorists are detected through intelligence gathering, you would be surprised how many more serious offences we detect by initially stopping a vehicle for a more minor offence.”

“I'd like to congratulate everyone involved in this operation and once again there's a very clear message for the criminal fraternity that in Suffolk we're after you, you'll get caught and if found guilty I hope you'll be punished severely.”