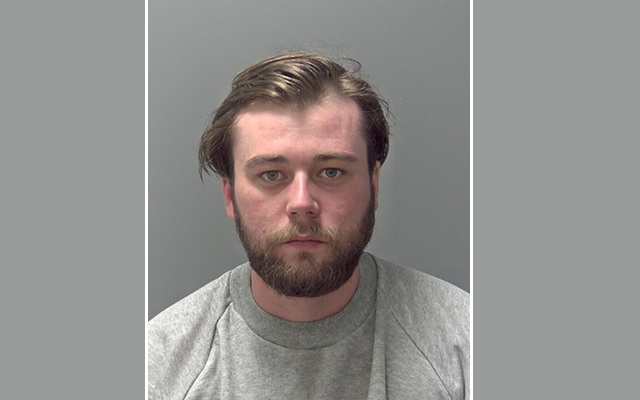 A 25-year-old man has been jailed for three offences of assault, including spitting at two West Suffolk Hospital nurses.

Zeb Fitts, of no fixed address, appeared before Ipswich Crown Court on Wednesday 29 April, where he was sentenced to a total of eight months’ imprisonment.

Fitts had previously pleaded guilty to the following four offences, all occurring in Bury St Edmunds:

The crimes took place on Monday 6 April, beginning at an address in Northumberland Avenue, where police were called at 12.45pm to reports that a man had been assaulted.

The 19-year-old victim had been punched and kicked, but did not sustain any serious injuries. A mirror at the address was also smashed.

Fitts was arrested at the scene and taken in the first instance to West Suffolk Hospital to have a hand injury assessed, but due to the fact he was acting in an aggressive manner he had to be placed in restraints.

As a result of his behaviour, it was decided it would be safer for him to receive treatment in the car park, rather than be taken inside the hospital.

Two accident and emergency nurses came outside to treat his hand and while they were doing this, Fitts became verbally irate and then spat directly at them causing them to recoil, with his saliva hitting their faces and protective masks.

He was then taken into police custody and subsequently charged with the four offences, before making his first court appearance on Wednesday 8 April.

Superintendent Kim Warner, West Suffolk Area Commander, said: “I am pleased to see that justice has been delivered swiftly and Zeb Fitts has been sentenced appropriately.

“We are in the midst of a national crisis - one which our colleagues in the NHS are leading from the front - and to treat another person in this way – in particular someone trying to help you - is unacceptable at any time, but especially so at the moment.

“I repeat the words I used when Fitts was convicted – his actions were both utterly disgusting and reckless beyond belief. Assaults on emergency workers will not be tolerated and offenders can expect to be dealt with robustly, which as this case demonstrates will most likely result in a jail term.”

A 25-year-old man has admitted three offences of assault, two of which relate to nurses at West Suffolk Hospital being spat at.

Police were called at 12.45pm on Monday 6 April to reports that a man had been assaulted at an address in Northumberland Avenue, Bury St Edmunds.

A 19-year-old man was punched and kicked, but did not sustain any serious injuries. A mirror at the address had also been smashed.

Zeb Fitts, of no fixed address, was arrested at the scene and taken in the first instance to West Suffolk Hospital to have a hand injury assessed.  Whilst he was receiving treatment, Fitts spat in the faces of two accident and emergency nurses.

He was then taken to Bury St Edmunds Police Investigation Centre for questioning and was subsequently charged with the following four offences: two counts of assaulting an emergency worker; one count of assault causing actual bodily harm; and one count of criminal damage. (The final two charges relate to the incident at Northumberland Avenue).

Fitts appeared before Ipswich Magistrates’ Court today, Wednesday 8 April, where he pleaded guilty to all four offences. He was remanded in custody pending an appearance before Ipswich Crown Court on Wednesday 29 April.

Superintendent Kim Warner, West Suffolk Area Commander, said: “At a time when our colleagues in the NHS are on the front line of combatting coronavirus, spitting at nurses who were trying to treat you is both utterly disgusting and reckless beyond belief.

“I cannot comprehend what compels someone to do such a thing, but at least he has admitted his crimes at the earliest opportunity and has saved a further drain on public services. I hope he now reflects on his actions whilst awaiting sentence.”