Lowestoft – Man jailed for burglaries, assault and other offences 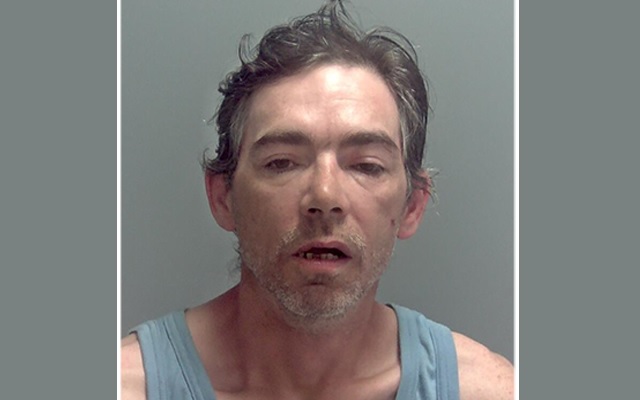 A 44-year-old man from Lowestoft has been jailed for over three years in connection with a number of offences, including burglary and assault.

Anthony McLeod, of Victoria Terrace, appeared before Ipswich Crown Court on Tuesday 5 May, where he was sentenced to a total of 38 months’ imprisonment.

McLeod pleaded guilty to the following six offences, which all occurred in Lowestoft on Friday 3 April:

The series of events began at around 11.30am on 3 April, when a resident of a house in Long Road heard a loud noise downstairs and when he went to investigate, discovered McLeod inside the conservatory banging hard against the locked integral door to the kitchen.

McLeod was unsteady on his feet and appeared to be intoxicated. When challenged about what he was doing, he said he was part of a coronavirus team making checks. The victim then told him to leave and ushered him out of the house, before calling the police.

Around five minutes later, also in Long Road, McLeod was caught trying the door handles of a car parked on a driveway, before he was again disturbed by a resident at the address.

He then moved on from there to another address in the same road, where he stole property from within an integral garage, including two walkie talkies, and a quantity of food and drink items from inside a fridge and a freezer.

The three other offences occurred between 2pm and 2.30pm at a flat in Victoria Terrace, where he punched and headbutted a woman who was known to him and caused damage to the door of the flat and also to a wall inside which he punched.

Police were called, locating and arresting McLeod in the street nearby at 2.35pm. Officers went to check on the victim of the assault and also to inspect the damage caused to the flat. Once inside, they discovered a bag of food and drink items which were later found to have been stolen from the garage in Long Road that morning.

McLeod received two concurrent prison sentences of 34 months for the burglary offences and a further term of four months imprisonment to be served consecutively for the assault.

Detective Inspector Matt Adams, of East CID, said: “Anthony McLeod took himself on a mini crime spree on the day in question, entering peoples’ homes and stealing their belongings, before becoming more violent by damaging property and ultimately assaulting someone.

“This type of behaviour is completely unacceptable and so I am pleased with the sentence he has been given, which should give him plenty of time to reflect on his actions in prison.”

A man has been charged in connection with a number of offences reported in Lowestoft.

On Friday 3 April, Suffolk Police received reports of a burglary on Long Road in the town.

He appeared at Norwich Magistrates’ Court today, Monday 6 April, and has been remanded into custody to appear at Ipswich Crown Court on Tuesday 5 May.