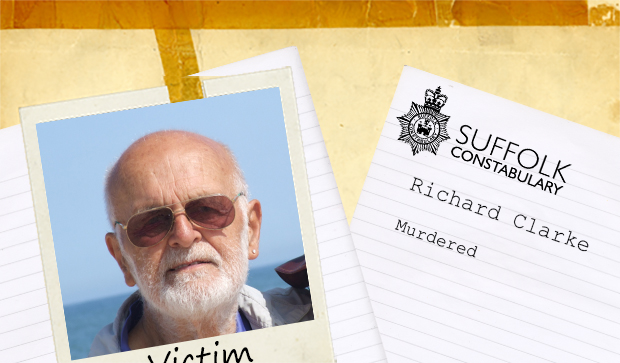 Richard Clarke, aged 73, died after being found collapsed on his driveway in Cranley Green Road in Eye on Saturday 22 August 2009.

It is suspected that Mr Clarke was the victim of an assault, which resulted in him receiving a fatal head injury.

On the afternoon of Friday 21 August 2009 Richard went to The Horseshoes Public House in Billingford and left in a taxi. He stopped to pick up a Chinese meal in Eye at about 7pm and he arrived at his home, Park Dale, at about 7.15 pm.

It is thought that Richard consumed part of his meal in the driveway of his home. A witness saw a male, believed to be Richard, apparently sat in his driveway holding his head just after 8pm. It is possible he had sustained his head injury by this time. The next time he was seen was when he was discovered seriously injured in the early hours of Saturday morning, 22 August 2009.

The Norfolk and Suffolk Joint Major Investigation Team carried-out extensive inquiries into Richard’s death, but were not able to establish any motive for this attack and the killer has not been identified.

Since that time, the case has been subject to regular reviews and further media coverage, but the case remains unsolved.

In line with Suffolk Police’s commitment to solving crime, this case has been one of a number which have been subject to regular review. This case now forms part the unsolved case review process and is subject of continual review for lines of investigation that can progress this case.