Long arm of the 'paw' vital in fight against crime 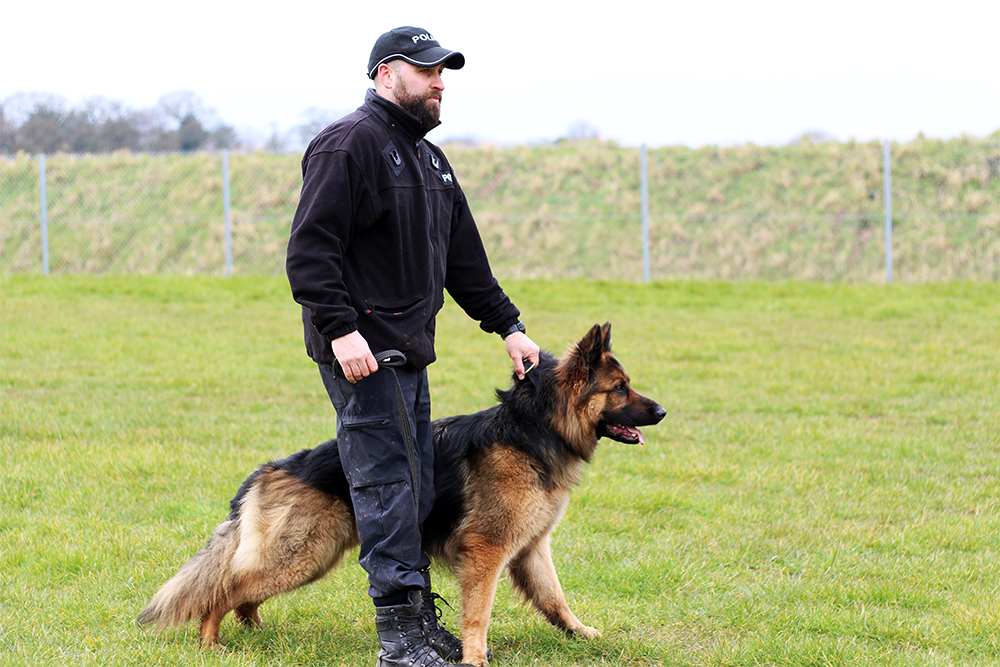 From tracking down burglars to bike thieves, drink drivers to drug dealers, paw patrols are invaluable in the fight against crime.

The 25 handlers and 47 dogs which make up Norfolk and Suffolk’s joint dog unit provide specialist support to colleagues to help keep both counties safe.

Last month, police dog Billy along with handler PC Frances Peters helped colleagues in the arrest of two men in Norwich for drug and driving offences.

Officers stopped a car on Newmarket Road on 20 January in relation to traffic offences; they arrested the passenger and a short while later detained the driver who had initially left the scene. Billy was able to track a scent from the vehicle leading officers to the driver. Two men, aged 27 and 28, from London and Essex respectively, were questioned in relation to drug offences and the 28-year-old for a number of driving offences. Both have been released on bail until 24 March while enquiries continue.

In January, police dog Arnie searched address in Key Street, Ipswich, following reports of suspicious activity. Drugs dog Arnie searched a room finding a bag concealed underneath a bed which contained wraps of cocaine, heroin, crack cocaine, herbal cannabis and cash. Before leaving the room Arnie jumped on a desk, indicating towards some crumpled paper, which after further inspection by handler PC Neil Robertson, was found to contain a wrap of heroin.

In December (2015) police dog Layla was hot on the heels of suspects as officers responded to a bike theft in Bury St Edmunds. Layla was able to follow a scent track, leading officers to an area of wasteland where the £3,000-worth bike was recovered while also helping to identify a suspect who was arrested in connection with the theft.

December also saw young police dog Sheldon help officers recover cannabis and cash during a warrant at a house in Thursford, Norfolk; his indications led to the arrest of three people for drug offences despite a number of distractions at the property, including three cats.

In an average month the team:

Inspector Ross McDermott, who oversees the joint dog section, said: "Police dogs and their handlers are highly trained and used in a variety of scenarios from catching criminals to finding missing people, saving officers’ valuable time and ultimately saving lives.

"The dogs can pick up a person’s scent and track for miles so they’re a real asset in incidents where time is of the essence to find someone, be it a culprit or a vulnerable person.”

The team have been involved in a number of successful jobs, including the pursuit of armed robbers following a raid at Windsor Bishop jewellers in Norwich on 5 August last year along with other resources including the NPAS helicopter. Suspects were followed in van to a wooded area off the A11 near Thetford where police dogs Kaiser and the late Ozzy with their respective handlers PC Neil Wisken and PC Nick Lofthouse tracked the scent of a suspect and with further direction from colleagues in the helicopter, were able to detain the final culprit. The gang of six men were later jailed for a total of 37 years.

When tracking a scent police dogs have to overcome many distractions, including wildlife, vehicles, people and tempting smells, but nothing, including the smell of a McDonalds Happy Meal, put Ozzy off the scent of man who had fled the scene of a collision in Nacton Road, Ipswich. A member of the public reported a Jaguar crashing into a fence and the male driver fleeing the scene shortly afterwards. Ozzy, who sadly had to be put down in December following an illness, picked up a track and with handler PC Lofthouse crossed the carriageway and followed the road for about 500 metres, overcoming many distractions including the including the inviting smell of food, before heading into a field of crops where a man was found lying flat on the floor. The suspect provided a positive breath test and was arrested for drink-driving. Further enquiries revealed the car had been stolen from a garage and he was arrested for further offences.

General purpose dogs (normally German Shepherds or Belgium Malinois) are used for tracking and searching for missing people or criminals. These canine cops can also be used in searching for items of property which have recently been discarded. All dogs are trained in public order tactics and can be deployed into a variety of public disorder operations, including football matches. Some handlers will also have a specialist search dog which will either detect explosives, drugs, cash and firearms. The breeds used for this role are Spaniels and Labradors.

Dogs are brought into the force through recognised breeding programmes although previously some dogs have been recruited through rescue centres. Key qualities include a playful character, confidence and obedience. General purpose dogs will undergo 13 weeks of training including tracking and searching buildings and open areas and those requiring more specialist skills required in the search for drugs and explosives will require additional training for six to eight weeks respectively.

The majority of handlers have two dogs, a general purpose dog and depending on experience, a specialist dog (drugs/explosives). The dogs live at home with their handlers are quite often retire with the handler or stay within the family.

In July police dog Daley attended a burglary in Levington Road in Ipswich with handler PC Chris Squirrell. Intruders had stolen a number of items before fleeing the scene and Daley was able to track away from the property, finding the victim’s handbag which still contained her mobile phone and purse. He continued before picking up a human scent, indicating towards a garden fence where a man was detained by patrol officers on suspicion of burglary and criminal damage.

A 30-minute search in Fakenham paid-off for persistent police dog Shuck back in June when after climbing a 12ft overgrown embankment then scaling a two-foot fence, he led handler PC Jim Wells to a man on the run from police. The man was detained and charged for breaching court orders.

In Watton that same month, Shuck followed a scent trail from a house where police had been called following concerns for the safety of a man. Arriving on scene about 20 minutes after the man had left, Shuck was able to pick up his scent and follow the track for a kilometre before finding the vulnerable man.

Meanwhile in August, a prison absconder from Hollesley Bay was found hiding in a crop field by police dog Otto. Handler PC James Thomas had seen the man run into a field of sweetcorn plants and sent Otto to search for him. The man had run about 10 metres into the field where he was found crouching on the ground by Otto who indicated his find with a flurry of barking. The man, who was serving a sentence for burglary, was arrested and returned to prison.

Tim Passmore, Suffolk Police and Crime Commissioner, said: "I take a strong personal interest in the dog unit and the excellent work they carry out. I was pleased to be involved in plans which led to the recent increase in resources in this area, which is extremely positive.”

Dog handler, Sgt Lou Foulds, will hold a live web chat on Thursday 10 March at 2pm, giving people the chance to ask questions about the role of a dog handler. The live web will be hosted on the Norfolk Police website at www.norfolk.police.uk and advertised on social media prior to the event.