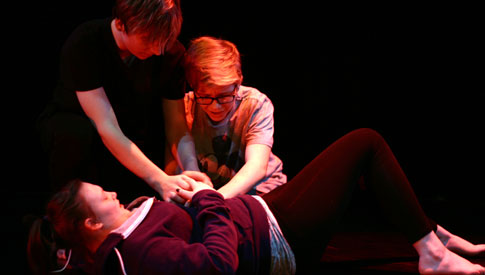 Carrying a knife can have shocking consequences which can turn your world upside down – this was the message to school pupils watching a play at an Ipswich theatre.

Pupils from Ipswich Academy performed “The Fear That Feeds” as part of Suffolk’s Bin a Blade anti-knife campaign. Two performances were put on at the New Wolsey Studio for students at six schools in the area on Tuesday 12 February 2013.

The Fear That Feeds tells the story of two close friends whose friendship is slowly torn apart by the influence of a new girl who drives a wedge between them. It begins with name calling and bullying and culminates in one girl receiving a knife wound which clearly affects all those involved.

Ipswich Academy students performed the play in 2012 with the support of Suffolk Police Authority and local officers including PCSO John Hood who had a role in the production. Suffolk Police then approached the writer of the play, Natasha Higdon, to use it as part of Bin a Blade. PCSO Steve Johnson took on the acting part in the two school performances.

Sergeant Kathy Ellis from Suffolk Police’s Community Safety Department said: “This play is hard-hitting and has had a clear impact on those who have watched it so far, so we were keen to use it to get the Bin a Blade anti-knife message to more young people.

"It gets the audience talking about a number of issues including knives, and we also gave out information from Crimestoppers to give the young people alternative ways to find out information about knife crime and report any concerns.”

Natasha Higdon said: “I have watched and read different case studies of parents who have lost their children as a result of knife crime or bullying-related issues. I have also been intrigued at what influences ‘young minds’, such as peer pressure, media and social networking. I think society underestimates the implications that the media has on instigating and fuelling bullying or acts of violence.

“The children are what carry the message, as they are so focused and self-motivated and have approached the project with maturity and empathy. The performance is a contemporary piece that uses symbolism to highlight what words cannot always explain, to include dance, poetry and narrative. Not all bullying incidences are stopped in their tracks and resolved, hopefully the play does not hide or conceal but instead will instigate discussion and reflection.”

Around 180 students and teachers watched the play, and were very impressed with both the performance and the message –

“Very clear message put across in a really good way.”

“The performance was very realistic, touching and effective.”

“The message was obvious. Built up the tension well. Acting was amazing.”

Four permanent knife bins are available outside Ipswich, Lowestoft, Bury St Edmunds and Mildenhall Police Stations for anyone to bin a blade anonymously. Since the amnesty was launched in December 2010, 8330 knives have been deposited and shredded by Sackers Recycling in Great Blakenham.